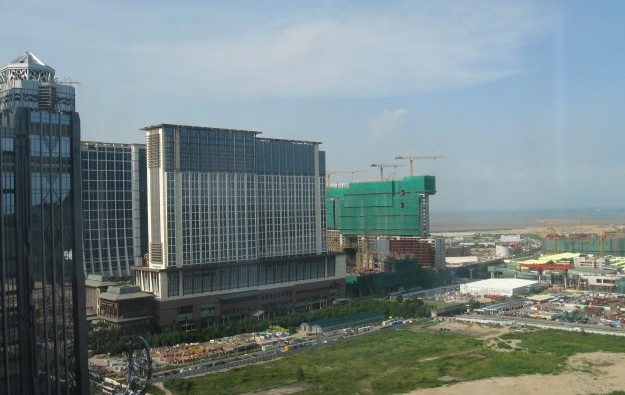 Under the arithmetic of the Macau government’s gaming table cap, a total of 1,097 tables remain to be shared between the four major Cotai projects yet to open, said a note on Wednesday from Union Gaming Securities Asia Ltd.

The institution added this suggests the four major schemes still to launch are likely to get 250 tables each. They are: the US$4.1-billion Wynn Palace from Wynn Macau Ltd, due to open on June 25; the HKD24-billion (US$3.1-billion) MGM Cotai from MGM China Holdings Ltd, due to open in the fourth quarter 2016; the HKD30-billion Lisboa Palace from SJM Holdings Ltd, due to be completed by the end of 2017; and the US$2.7-billion Parisian Macao from Sands China Ltd, on track to open in the second half of 2016.

Union Gaming analyst Grant Govertsen wrote: “…we suspect that… all four upcoming projects are more likely than not to get similar allocations that are in line with what has become the new baseline: 250 tables each.”

He noted that the two big new Cotai resorts that opened this year each received the same size of table allocation – 250 new-to-market units.

Studio City, a US$3.2-billion Cotai gaming resort majority-owned by Melco Crown Entertainment Ltd, had made a great play of its non-gaming facilities in the run-up to its opening on October 27 as an argument for receiving at least 400 tables. In the end it got the same allocation as the HKD19.6-billion Galaxy Macau Phase 2 which opened on May 27. It is an extension of Galaxy Macau, a resort developed by Galaxy Entertainment Group Ltd.

Galaxy Entertainment got 150 new-to-market tables at the joint opening of Galaxy Macau Phase 2 and a satellite property called Broadway Macau. That was followed by an announcement in late October of a further 100 for the operator, 50 immediately and a further 50 to be available in January. Melco Crown announced shortly before Studio City opened that it would receive 250 tables – 200 at launch and a further 50 in January.

“One school of thought was that the government would allocate more table games to Studio City (relative to Galaxy Macau Phase 2 / Broadway) as it is a brand new standalone property. However, the end result was the same: each got 250 tables,” noted Mr Govertsen.

The Macau government had previously said a factor in deciding gaming table allocation for new casino projects would be the amount of non-gaming facilities offered, and the property’s contribution to diversification of the city’s general economy and the tourism and leisure sectors in particular.

Mr Govertsen said that without more specific guidelines regarding public policy on the table cap, there were “various theories being floated as it relates to how the balance of tables will be allocated”.

The cap aims to limit the increase in live dealer table numbers to 3 percent compound annual expansion until the end of 2022, from a base of 5,485 tables recorded at the end of the fourth quarter in 2012.

International casino operator Las Vegas Sands Corp has been ranked as the most sustainable firm in the global casino sector, according to the 2023 edition of the S&P Global Sustainability... END_OF_DOCUMENT_TOKEN_TO_BE_REPLACED