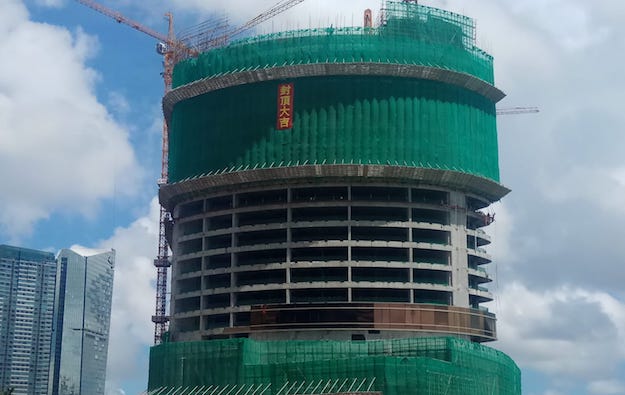 The purchaser of a 50-percent stake in a Genting Hong Kong Ltd subsidiary involved in developing a waterfront hotel scheme in Macau (pictured in a file photo), has the option to buy the remaining 50 percent in the subsidiary, at any time up to December 1, 2021.

That is according to a Thursday filing from Genting Hong Kong, an operator of casino cruise ships.

If the purchaser does not exercise the call option, Genting Hong Kong can then exercise a put option to require the purchaser to acquire the remaining 50 percent in the subsidiary. Such put option may be exercised during the period from December 2, 2021 to December 1, 2022.

In November, the purchaser of the initial 50 percent in Genting Macau Holdings Ltd – for HKD750 million (US$96.7 million) – was identified as White Supreme Corp, a limited-liability firm incorporated in the Republic of the Marshall Islands.

Macau-based investor Ao Mio Leong was identified as a principal shareholder and the current director of White Supreme, whose activities are said to be related to real estate, leisure and hospitality investments.

Thursday’s filing by Genting Hong Kong noted the project’s costs had amounted to HKD1.06 billion since the start of piling work in July 2017. A further HKD2.72 billion would be required to complete construction.

“This would no doubt divert the resources of the group at a time when the group needs to focus on the cruise and shipyard operations,” said Genting Hong Kong in its Thursday filing, which confirmed the sale of the initial 50 percent interest had been completed on December 2, 2020.

The latest statement to the Hong Kong bourse said seller and buyer had “considered it beneficial for the transfer of the sale shares and the option shares to be split into two phases”.

The disposal completed so far, “aligned with the group’s objective to sell non-core assets and will reduce the group’s financial burden in meeting future funding requirements in relation to Genting Macau’s business,” stated Genting Hong Kong.

The proceeds of the sale would provide general working capital to Genting Hong Kong, “enabling lay-up” of those cruise ships in its fleet that are “not in operation,” as well as the ongoing operation of “those cruise ships that continue to sail, in addition to funding the group’s cruise-related and other operations”.

The latest filing noted that due to the Covid-19 pandemic, development of the land had been suspended for 15 days in February last year.

“Construction gradually resumed thereafter up to July 2020, when the building structure was topped off, after which construction was suspended in order to conserve the available cash until further funding is secured,” stated Genting Hong Kong.

“Subject to obtaining relevant approval from the Macau government, the latest target completion date was expected to be around mid-2022,” added the filing.

No mention of gaming has been mentioned in relation to filings on the scheme. June 2022 is nonetheless the time when the current six operating licences are due to expire.

Genting Macau holds a 75 percent interest in Macau Land Investment Corp, a British Virgin Islands (BVI) firm, which via the Treasure Island entity, controls the land for the scheme. The remaining 25 percent in Macau Land Investment is held by World Arena Corp, another BVI firm, in which businessman “Kwan Yan Chi holds certain interest,” according to Thursday’s filing, and Silverland Concept Corp, another BVI firm, in which a third party, Kwan Yan Ming, “holds certain interest”.

The year 2024 is still the targeted start date for operation of a five-star hotel and casino complex at the Westside City Project (pictured in an artist’s rendering) in Manila, the Philippine... END_OF_DOCUMENT_TOKEN_TO_BE_REPLACED