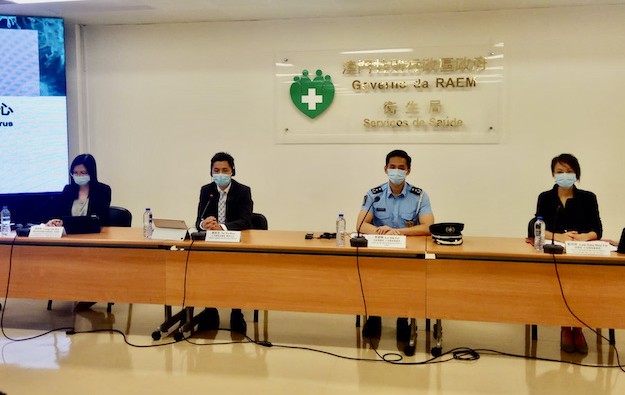 A total of 51 Macau hotels, accounting in aggregate for 2,700 hotel rooms, has expressed interest in taking part in a Macau government plan to allow travellers via Hong Kong to have quarantine-free trips to Macau with movement restrictions once there.

The tally – as of Wednesday – was given by Liz Lam Tong Hou (pictured, far right), of Macao Government Tourism Office, during a Thursday afternoon briefing by the city’s Novel Coronavirus Response and Coordination Centre.

Ms Lam did not specify how many of the 51 hotels were in casino resorts.

The trigger for the start of the initiative was likely to be 14 days of zero new local Covid-19 infections. “Imported-related” cases or “cases of clear infection origin” in Hong Kong could be excluded from the count, on the provision they were not linked to what were termed “community outbreaks”, said Macau health official Tai Wa Hou (pictured, second left). Details were still to be confirmed between the two places, he added.

Mr Tai said there was no fixed date regarding when such a quarantine-free scheme might happen. Hong Kong media had reported on Thursday, that it might start as soon as July 11.

But Mr Tai did say there would be some form of quota in terms of the number of travellers that could benefit from such a scheme, and that it would be different for inbound to Macau versus inbound to Hong Kong, based on what he termed preliminary consensus among the authorities in both cities.

Details regarding admission to Macau casinos for such ‘blue code’ visitors was still under study.

Mr Tai said a quarantine-free bubble for visitors coming via Hong Kong would only be for those that had obtained a second vaccination shot at least 14 days earlier.

On arrival at their destination, they would also need to present a ‘negative’ nucleic acid test result issued within 48 hours.

The official added the Macau government was also considering plans for visitors via Hong Kong to stay in places other than hotels. But what restrictions might apply on their movement was still being studied, Mr Tai added.

FBM, a maker of casino slot machines and an international specialist in electronic bingo machines, is to launch its “Jin Qián Link” slot product at Global Gaming Expo (G2E) 2022 at the Venetian... END_OF_DOCUMENT_TOKEN_TO_BE_REPLACED