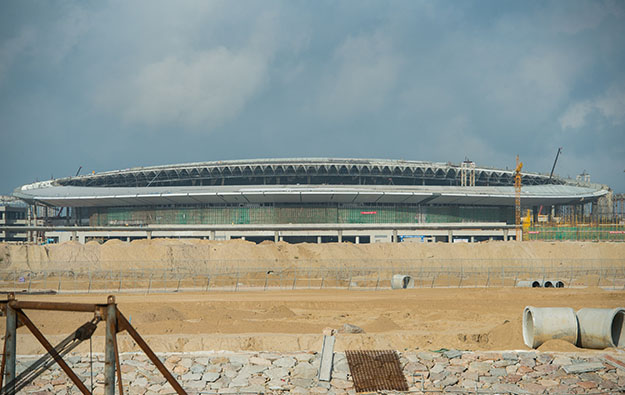 The service, “One Bus” announced on Monday its planned route, fares and daily runs. It includes stops at Sands Macao on Macau peninsula, as well as the Venetian Macao and the Parisian Macao in Cotai.

The information from the bus brand gave no information on when tickets would go on sale. The official opening date of the Hong Kong-Zhuhai-Macau Bridge is still to be announced. The infrastructure will provide a direct-line road link between the major international transport hub of Hong Kong International Airport and Macau, across the Pearl River Delta.

One Bus is to be operated by an entity called One Bus Hong Kong Macau Ltd. It services will run between the “apm” shopping mall in Kwun Tong, Kowloon – via the respective Hong Kong and Macau boundary crossing points served by the bridge’s artificial islands – with a final stop at the Parisian Macao.

One Bus is to charge HKD170 (US$22) one-way per daytime trip, and HKD190 one-way per night-time trip and on public holidays.

In response to a query from GGRAsia regarding ticket sale points in Macau, the operator said that was “due to be announced”.

In May Macau’s Transport Bureau confirmed that the city’s existing casino shuttle bus services would not be allowed to cross the Hong Kong-Zhuhai-Macau Bridge. But the bureau said at the time that it was discussing with the Macau casino concessionaires the possibility of the companies running a joint shuttle bus service with two routes: from the Macau boundary crossing of the HKZM Bridge to, respectively, the Outer Harbour Ferry Terminal and the Taipa Ferry Terminal.

An aggregate of 100 local operators – 40 from Macau and 60 from Hong Kong  – will have permission to run light vehicle passenger services between Hong Kong and Macau. Macau’s Transport Bureau announced the award of its 40-strong quota earlier this month.