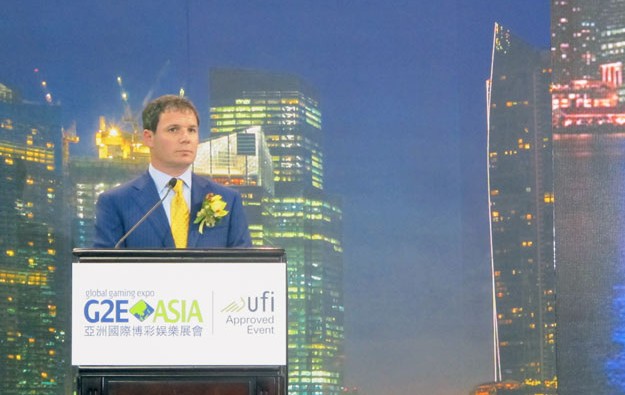 Geoff Freeman, president and chief executive of the American Gaming Association (AGA), told GGRAsia in an interview on Wednesday that the casino industry trade body and lobbying group was now firmly engaged in the debate about legalising casino gambling in Japan. The AGA had said in April it wanted to be “helpful” in providing “information and experiences” from the United States about the regulated industry.

Referring to an AGA event for the Japanese media this week in that country’s capital, he told GGRAsia: “We had more than 20 reporters with us on Monday in Tokyo, briefing them on the industry in the United States – the economic impacts, the social impacts, the industry’s commitment to communities. That’s all new information to them. If we as an industry don’t collaborate to provide that type of information, then you really cede the playing field to the critics who – if I’m being kind – are often misinformed. It’s important that we tell our story in an effective way, and I think we’re beginning to do that in Japan. “

Mr Freeman was speaking on the second day of Global Gaming Expo (G2E) Asia 2015, taking place in Macau until Thursday.

On April 28, Reuters news agency reported that a group of Japanese pro-casino legislators – including members of the governing Liberal Democratic Party – had submitted an enabling bill to the country’s parliament, the Diet, aimed at legalising the principle of casino resorts. The story added however there was no indication as to when the bill could be passed.

Some more sceptical voices note that Japan has had a number of false starts on such legislation – previously most notably in June 2014, when an enabling bill initially ran out of time in the ordinary session of the Diet. Its chances of passage in an extraordinary autumn session of the legislature that year were then dashed when Prime Minister Shinzo Abe called a snap general election, in part to get a clear mandate on a proposed second round of sales tax hike.

The cultural need in Japan to get consensus on important political decisions was identified during a conference session of G2E Asia on Tuesday as a key stumbling block to the industry’s advance in that country.

But Praveen Choudhary, managing director of Morgan Stanley Asia Ltd, said during the Tuesday panel on the outlook for the Asian industry that he thought there was “a more than 50 percent chance” of such enabling legislation going through this time round.

“What has changed is last time around they [the bill’s proposers] wanted to have consensus before they put the bill on the floor. This time, they are going to put the bill without having consensus and have a vote on it. That changes everything,” said Mr Choudhary.

The analyst added: “The second thing that has happened is the Diet [current session] has been extended for two more months – it’s going to go all the way to July. It gives a lot more time.”

The AGA’s Mr Freeman told GGRAsia: “It’s an interesting thought, and I certainly hope he’s right. But for every one person who feels optimistic, I can usually find two that are more pessimistic. We will continue to plug away, and do our best to provide information, hope for the best, and play an important role.”

Mr Choudhary did give a caveat to his remarks, saying there were “so many ifs and buts” to be debated at the legislation stage – including a second bill to administer and regulate casinos – that it could take two-and-half years for that process. It could then take another four or five years to build a resort, meaning it would be likely impossible to meet a deadline of 2020, coinciding with the Summer Olympic Games in Tokyo to open a first resort. Such a timetable had previously been mentioned by the central Japanese government.

Mr Freeman on Wednesday said the AGA had also had a good response from Japanese lawmakers it had met on May 1 in Washington D.C. around the time of Mr Abe’s recent visit to the U.S. capital.

“It was a very good session with very good questions from the Diet members. One of the questions that stand out in my mind was ‘Is Japan too late?’

“The answer is a definitive ‘no’. We [at AGA] understand that. There’s nearly 1,000 casinos in the United States; very, very few in Asia. But it’s a fair question. And, having the opportunity to really discuss that, and paint a fair picture of how casino gaming meets an existing demand, was very positive.”

Mr Freeman said however that the AGA is expecting plenty of further debate within Japan before legalisation can become a reality.

“Japan is an important event for the industry,” he told GGRAsia. “We all know that when a market opens, there are limited licences. And when you get to that point, there’s a battle to win one of those licences. And our industry has been trained over years and years of those battles and is primed to fight. But now is the time to work together. Now is the time to open up the market. The fighting can come later.

“The [gaming] companies have come around in a unique way, to say ‘Let’s work together to get this market open.’ Everything else will take care of itself down the road.”

Macau recorded 69,279 visitor arrivals on the sixth day of the Chinese New Year (CNY) holiday period, showed official data. The city welcomed about 384,600 visitors in the first six days of the... END_OF_DOCUMENT_TOKEN_TO_BE_REPLACED