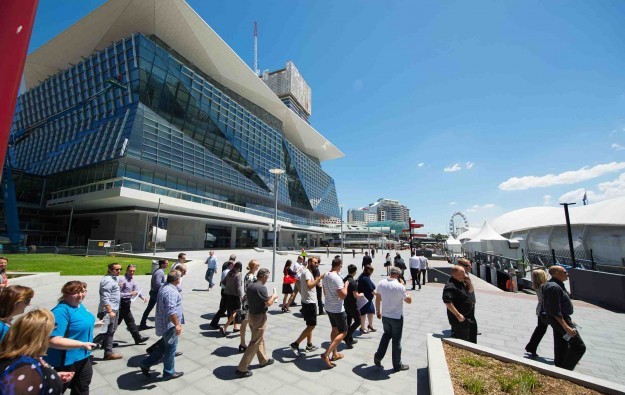 A total of 80 percent of the exhibition space available for the 2017 edition of the Australasian Gaming Expo (AGE) has already been sold – nine months before the event takes place – says Ross Ferrar, chief executive of the event organiser, the Gaming Technologies Association.

On Friday, 120 of the exhibitors due to attend the 2017 edition were given a guided tour of the fresh location – the newly-built International Convention Centre Sydney (pictured) at Darling Harbour in Sydney, New South Wales.

Visitor attendance for this year’s edition of AGE was the highest in the 27-year history of the event, according to figures from the organisers.

The three-day gathering welcomed a total of 6,813 visitors and 195 exhibitors, the organisers had stated shortly after the show.

Casino equipment supplier Sega Sammy Creation Inc said in a Friday release it was debuting its Genesis Crest 43J cabinet in Asia. The product will be available at an in-person trade show, G2E Asia:... END_OF_DOCUMENT_TOKEN_TO_BE_REPLACED