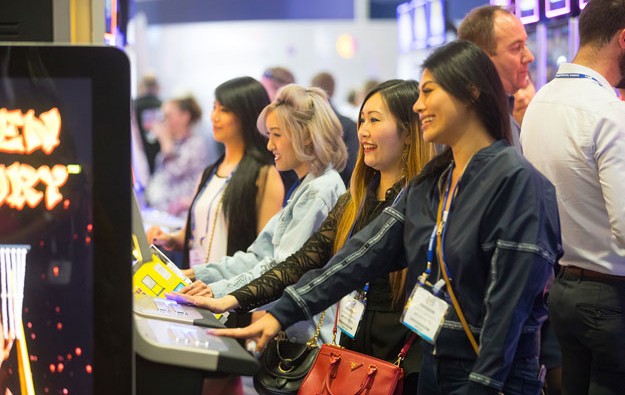 The Australasian Gaming Expo (AGE) saw a 19 percent uptick in the number of attendee visits following its return to the Darling Harbour district of downtown Sydney after a nearly four-year break, said the organisers.

Such visits amounted to 8,099 at the event’s new home at the recently-opened International Convention Centre (ICC) Sydney, New South Wales, compared to approximately 6,800 at the previous temporary venue at Sydney Exhibition Centre on Glebe Island, Sydney.

“It’s a key statistic that everybody looks at,” Ross Ferrar, chief executive of the event organiser, the Gaming Technologies Association, told GGRAsia.

“The relocation to ICC Sydney had a positive impact on visitor numbers… People like exhibition centres to be near the central business district of a city,” added Mr Ferrar.

As well as the novelty of a brand new venue, AGE 2017 also saw some upgrades in supporting technology, including paperless marketing communications between exhibitors and visitors.

“We had an attendee badge reader on every exhibition stand,” explained Mr Ferrar.

“If a visitor tapped their badge on reader, they were sent an email that day with information from each of the exhibitors they had tapped. That was hugely successful. In other words, exhibitors didn’t have to print pallets-worth of paper and visitors didn’t have to carry around bags full of brochures,” he explained.

There was a total of 11,967 badge ‘taps’ at exhibitors’ stands during the first two days of the event, and 3,956 ‘daily digest’ emails sent to those who ‘tapped’, said Mr Ferrar.

Visitors at AGE 2017 were able to broaden their knowledge about hospitality and gaming via seven complimentary seminars – with an aggregate of 1,400 places – covering the latest developments in venues, technology, research and cash management.

“We wanted to pick and choose the topics we felt were important for the industry; so we made the seminars complimentary for people who were registering to attend the exhibition,” explained the GTA’s Mr Ferrar.

Macau’s Court of Final Appeal announced on Monday sentences in relation to a total of nine cases concerning debt claims involving junket operators based at local casinos. In all the cases, the... END_OF_DOCUMENT_TOKEN_TO_BE_REPLACED