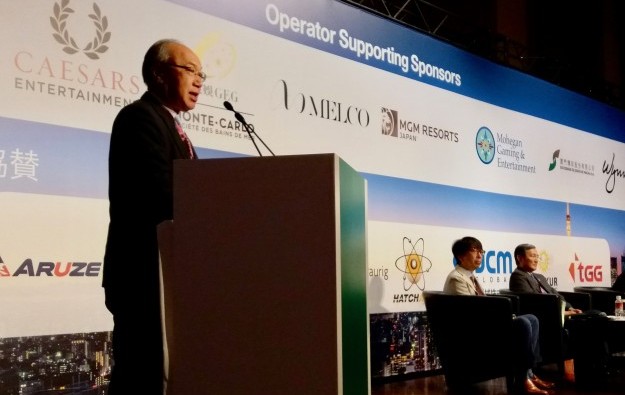 The idea behind attracting casino investors to Japan was to use private-sector money to tackle the public policy problem of Japan’s falling birth rate and ageing population, said Akihiko Sasaki (pictured left), deputy mayor of Tomakomai City on the southern coast of the northern island of Hokkaido.

Mr Sasaki was speaking on Friday, the second day of the Japan Gaming Congress in Tokyo. The conference is to discuss Japan’s nascent casino industry.

“The low birth rate and ageing process has led to a hollowing out of the downtown area, making it difficult to collect taxes,” said Mr Sasaki of his port city.

“Instead of using public money” to tackle this issue, his authority wanted to use “private money”, stated the official. “Despite the declining population, we want to reverse the trend of a declining economy,” he added.

He added in other comments in a follow-up discussion panel: “We have to take some kind of counter measure against that. We are seeing more tourists, but we are still weak in terms of attracting people for longer stays… We don’t have much infrastructure, so developers can use a green field site.”

Much of the media commentary on a Japanese casino industry has focused on the potential of large cities such as Osaka and Nagasaki. But Mr Sasaki talked up the virtues of the northern island of Hokkaido, which is noted for its inland scenery and winter sports.

“We want to promote things like sports tourism… and create world-class entertainment and an environmentally-friendly integrated resort,” stated Mr Sasaki.

The panel heard however that while Hokkaido represented 20 percent of Japan’s land mass, it had not created a unified bid among its local governments in order to make a proposal to the national government.

Wakayama prefecture, a local government that declared early its enthusiasm for hosting a casino resort, was also represented at Friday’s discussion. The local government was also notable initially for declaring that it would not allow Japanese to use any casino on its territory. It shortly afterwards reversed that position.

On Friday, Yoshinobu Nisaka, Wakayama’s governor, said use of “creative measures” would allow the issue of problem gambling to be addressed. “We can allow Japanese citizens into the casino,” he reiterated.

The official also spelled out a six-point plan for a Wakayama IR: a five-star hotel; meeting venues for international companies and academic conferences; a focus on Japan’s world-famous cuisine; an all-weather arena for international sports events and things such as e-Sports competitions; an interactive gaming centre using virtual reality technology; and the idea of “workation”, a combination of work and holiday in a single location.

Mr Nisaka said Wakayama also gave easy access to the surrounding Kansai region. Japan’s government has said it would like casino resorts to stimulate economic development not only in the immediate host location, but also in its hinterland.

A Wakayama casino resort could be a “concierge facility” to give access to “other forms of tourism in the Kansai area,” said Mr Nisaka.

He said a Wakayama resort was earmarked for a 40-hectare (98.8-acre) artificial island, about half of which was available for development. It would likely have 2,500 hotel rooms, and meeting space covering 50,000 square metres (538,200 sq feet). The likely budget for the resort was JPY280 billion (US$2.6 billion) with a projected payback period of 8.7 years, according to the official’s presentation.

Mr Nisaka said the deadline for the request for information for Wakayama would be the end of August.

Gaming revenue at Paradise Co Ltd, an operator in South Korea of foreigner-only casinos, rose by 312.9 percent year-on-year, to KRW39.17 billion (US$27.6 million). But such revenue was down 22.4... END_OF_DOCUMENT_TOKEN_TO_BE_REPLACED