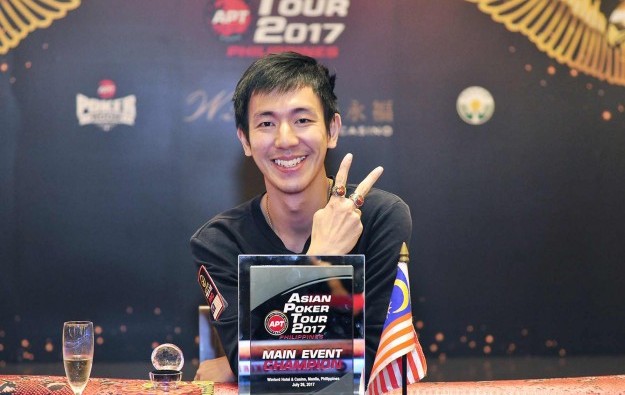 Coming off a victory in Cambodia earlier this month, Malaysian poker player Aik Chuan (pictured) became the first-ever back-to-back champion of a main event of the Asian Poker Tour (APT).

Mr Chuan on Tuesday won the main event of the APT Philippines 2017. The player took home approximately PHP1 million (US$19,760), according to a press release from the tournament organisers.

The APT Philippines 2017 was held at Winford Hotel and Casino in the country’s capital, Manila.

“Even if it was a small field, it feels really good to win the main event again. I’ve had some issues that kept me away from poker for a while and it feels good to be back,” Mr Chuan was quoted as saying in the press release. “I put in many hours to be better that I am so comfortable playing against anyone at the table,” he added.

The next event in the APT’s calendar is the APT Korea Incheon 2017, to be held from August 12 to 20, at the Paradise City casino resort. Paradise City, a venture between foreigner-only casino operator Paradise Co Ltd and Japanese pachinko operator Sega Sammy Holdings Inc, opened on April 20.

The nine-day tournament will feature a main event buy-in of KRW1.1 million (US$982). Other events like the Head Hunter, Monster Stack, No Limit Holdem, Pot Limit Omaha, Deep Stack Turbos, High Rollers, Super Deep Stack and a PLO High Rollers will also be featured during the poker tournament.

A Macau court was offered evidence on Monday, including of recordings from police-wiretapped telephone conversation, that the prosecution says proves the direct involvement of Levo Chan Weng Lin... END_OF_DOCUMENT_TOKEN_TO_BE_REPLACED