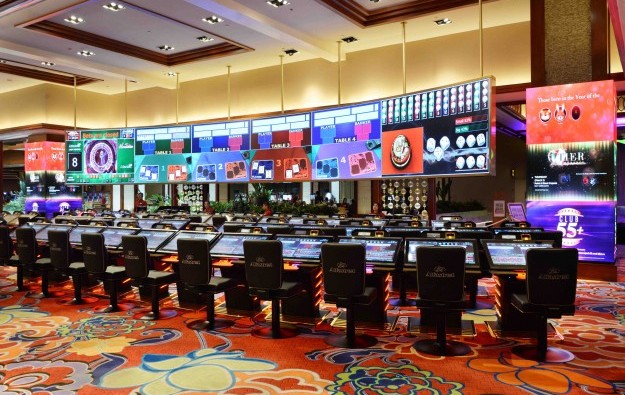 Casino equipment maker Alfastreet says it added “multiple” bespoke features and special betting options on behalf of the client when the firm installed 72 units of its Wiky electronic table game (ETG) terminal at Solaire Resort and Casino in Manila recently.

“We’re creating customised solutions for every single customer and we make sure our product is perfected before it’s placed on the casino floor,” said Deric Goh, Alfastreet’s sales director for Asia, in comments contained in a company press release about the installation.

The company stated that technology dispatched in the order allowed multiple games of baccarat, roulette and sic bo to be played. The terminals have been sited in a so-called ‘stadium’ format (pictured). Alfastreet also supplied to Solaire a version of the firm’s popular Royal Derby horse race game.

“Multiple baccarat tables, four-game simultaneous betting, side bets, and a special jackpot system, combined with enormous LED wall display, make this installation unique in Manila and a definite reference for all the other venues,” said Albert Radman, Alfastreet’s sales director, regarding the ETG product in comments also carried in the announcement.

“Solaire is always working out ways to stay number one casino in the Philippines and that’s why they chose Alfastreet for their supplier, as we’re the one that is flexible and resourceful to the point that we can efficiently accommodate the vision that Solaire presented to us,” further noted Mr Radman.

His colleague Mr Goh said “several more” major installations of Alfastreet product were due in Asia “in the following weeks”.

“The major operators recognise the quality and efficiency of our products and that’s the reason why we’re getting such a large momentum here in Asia,” added Mr Goh.

The Solaire property was developed and is promoted by Bloomberry Resorts Corp. The venue is located at Entertainment City, a zone in the Philippine capital earmarked for large-scale private-sector casino resorts.

Macau is entering a “new phase” in its approach to dealing with Covid-19, said on Thursday the official in charge of health policy, after nearly three years that has seen the tourism and casino... END_OF_DOCUMENT_TOKEN_TO_BE_REPLACED