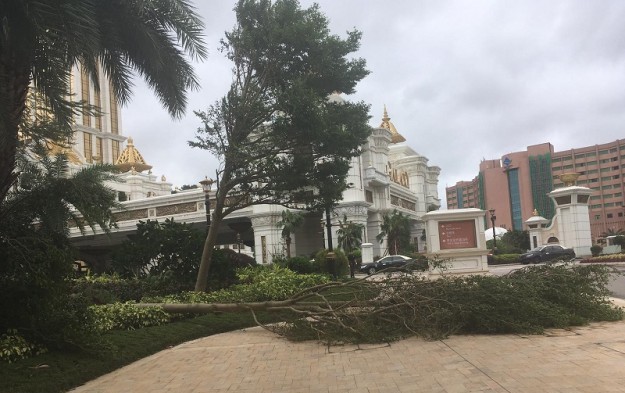 Macau’s main casino properties were all back to business as of Monday morning, following the end of a government-ordered blanket closure of the city’s gaming sector due to a “super typhoon” called Typhoon Mangkhut.

Casinos had been allowed by the Macau government to resume operations on Monday, from 8am onwards, after Typhoon Mangkhut – the world’s most powerful storm so far this year – struck the city over the weekend.

Casino operations had been paused at 11pm on Saturday, according to a government release that day.

In an emailed reply to GGRAsia, a spokesperson from Wynn Macau Ltd confirmed that the firm’s two casinos had both resumed operations at 8am on Monday.

All Melco Resorts properties – including City of Dreams, Studio City and Altira – had also “resumed normal operations” on Monday, a company spokesperson said.

Buddy Lam, senior vice president of public relations for Galaxy Entertainment, told GGRAsia the firm “started resuming gaming operations gradually at our properties from 8am today [Monday], and under close coordination with the relevant authorities.” He added: “It went very smoothly.”

GGRAsia also contacted SJM Holdings and Sands China regarding resumption of their respective casino operations following the landfall of Typhoon Mangkhut, but we had received no reply by the time this story went online. We also asked each casino operator about damages caused by the storm on their respective casino properties; only MGM China, Melco Resorts and Galaxy Entertainment provided feedback on the matter.

“We are making assessment on some damages but none of which will affect our operations,” the MGM China representative stated.

“Our teams were fully prepared to deal with the effects of Typhoon Mangkhut…Our properties recorded minimal external damages, and repairs are expected to be completed within the next few days for minimal disruption,” the Melco Resorts spokesperson told GGRAsia in an emailed statement.

As for Galaxy Entertainment’s properties, “no significant damage and most importantly, no serious injuries have been reported,” stated senior vice president Mr Lam in an email to GGRAsia.

Ground checks by GGRAsia detected some minor damages in some of the city’s casino resorts, including a few broken windows in the Encore tower of Wynn Macau in the peninsula, and in Studio City in Cotai. There were also some fallen trees around Galaxy Macau in Cotai (pictured).

GGRAsia approached the city’s casino regulator, the Gaming Inspection and Coordination Bureau, for comment on whether all gaming venues in Macau had already resumed operations following the end of the government-ordered blanket closure. We did not receive any reply by the time this story went online.

Macau’s casino gross gaming revenue (GGR) for the first five days of February is estimated at MOP1.9 billion (US$235.1 million) – or MOP380 million per day – a level that suggests a “45... END_OF_DOCUMENT_TOKEN_TO_BE_REPLACED