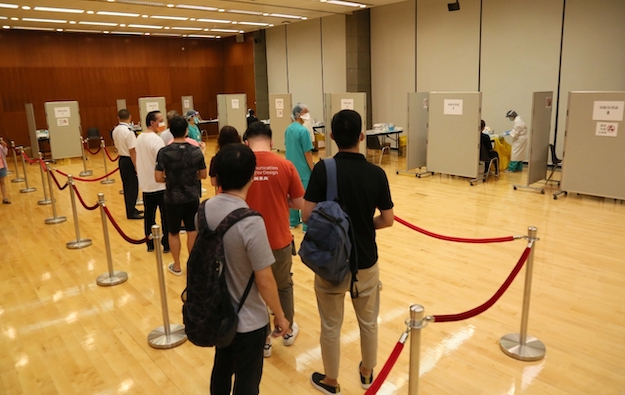 The Macau government announced over the weekend that no new cases of Covid-19 infection were detected locally following completion of a city-wide mass-testing operation.

The local authorities had decided to test the entire population for Covid-19 after four fresh positive coronavirus cases – all within the same family – were detected in Macau, involving the more infectious Delta variant of the virus.

The three-day mass testing operation was completed on Saturday (August 7) morning. A total of 614,465 people was tested – free of charge – for Covid-19 as part of the scheme. The city’s government also said that in addition, 101,786 people were also tested during the period, outside of the mass testing scheme, at other testing venues available in Macau.

All tests – an aggregate of 716,251 – returned negative results, according to the local authorities.

It was Macau’s first city-wide testing for Covid-19.

During a press conference held on Sunday, representatives from Macau’s Health Bureau discussed the possibility of launching a second community-wide round of Covid-19 testing. It was stated that no second round would be needed if all individuals that had been in close contact with the latest four confirmed cases, tested negative for infection.

The Covid-19 cluster detected in Macau had dimmed hopes of recovery for Macau’s gaming and hospitality trade over the summer, said several senior figures in the sector, in comments to GGRAsia.

Mainland China is the only place to have a mostly quarantine-free travel bubble with Macau. Recently Guangdong province, the largest-single source of tourists to Macau, has advised its citizens against trips outside that jurisdiction, amid an uptick on the mainland in Covid-19 cases.

Authorities in the neighbouring city of Zhuhai, in Guangdong, announced late on Tuesday that starting from 6am on Wednesday, people travelling between Zhuhai and Macau would need to present a certificate issued within 12 hours of departure, showing a ‘negative’ result for Covid-19.

Macau’s Chief Executive, Ho Iat Seng, said at a Wednesday press conference that the government hoped the local Covid-19 situation could be controlled within 14 days – i.e., by August 18 – so that “normal life” could resume.

Macau’s casino gross gaming revenue (GGR) for the first five days of February is estimated at MOP1.9 billion (US$235.1 million) – or MOP380 million per day – a level that suggests a “45... END_OF_DOCUMENT_TOKEN_TO_BE_REPLACED