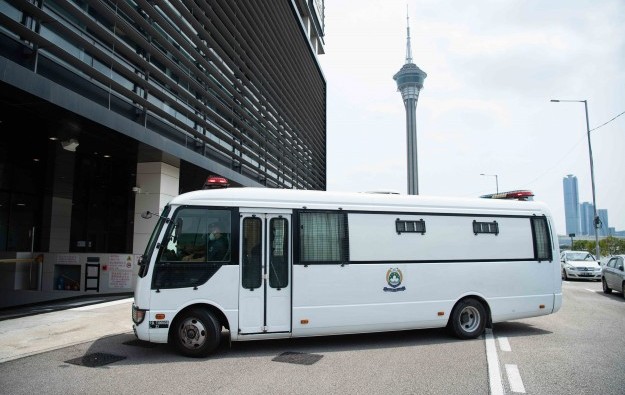 The trial of Alvin Chau Cheok Wa and other defendants linked to the now-defunct Macau casino junket Suncity Group Ltd has been delayed to September 19, over the absence of a defendant, said on Friday the Macau court due to hear the matters. The trial was scheduled to start that afternoon.

Mr Chau on Friday was seen in public for the first time since his detention in late November. His appearance was in a packed chamber of the Court of First Instance, for a mention of his trial on multiple charges linked to alleged illegal gambling operations. Neither Mr Chau nor the other defendants present in court (some pictured arriving by van under guard) were asked to speak during the hour-long initial proceedings.

The three-judge panel postponed the trial for just over a fortnight, as defendant Philip Wong Pak Ling, identified as the former head of Suncity Group’s finance department, did not attend court.

A total of 10 other defendants also did not appear in court.

Mr Wong’s lawyer said his client was in hospital, adding he was not sure when Mr Wong would be discharged from medical care and be able to attend the trial. The judges however considered that Mr Wong’s absence was not properly justified due to a lack of supporting documentation, and issued him a fine.

The defendants are accused of running a criminal syndicate that has allegedly cheated the Macau government out of about HKD8.26 billion (US$1.05 billion) in tax revenue from 2013 to 2021, according to a copy of the indictment reviewed by GGRAsia. A total of 92 witnesses has been asked to testify in relation to the trial.

MGM China Holdings Ltd is also seeking damages, in an amount to be set by the court, from a group of more than 10 defendants, also including Mr Chau and Mr Wong.

Mr Chau was detained in Macau on November on suspicion of facilitating illegal gambling overseas for Chinese customers. All of the junket brand’s VIP rooms in Macau were closed on December 1, 2021.