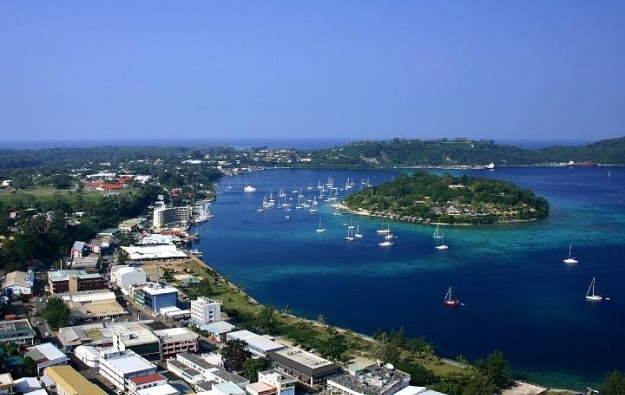 Hong Kong-listed gaming investor Amax International Holdings Ltd says it has completed the purchase of a 60 percent stake in Forenzia Enterprises Ltd, a firm that has access to an online gaming licence for the Pacific island nation of Vanuatu. The deal was closed for a total consideration of HKD48.1 million (US$6.2 million).

Amax International plans to use the licence to operate from the country’s capital Port Vila (pictured) live table games videoed and streamed for online players.

At the same time it will seek to arrange for junkets to fly high rollers from mainland China and elsewhere in Asia to Vanuatu to take part in those table games. It said so in a filing on Tuesday after trading hours.

The firm says it has enough connections in the Macau VIP sector to create a “50 percent probability” of achieving HKD30 billion in chip roll via this route in the first year of operations. The Macau market as a whole generated HKD442.3 billion (US$55.4 billion) in VIP rolling chip turnover in September according to unofficial industry returns seen by GGRAsia.

Amax International said its plan to get junkets to fly players to Port Vila is still subject to regulatory approval by the Vanuatu authorities.

It is the latest development of a trend for companies with involvement in the Macau casino junket sector to seek new opportunities offshore. In September Imperial Pacific International Holdings Ltd, an investor in the profit stream of Macau junket Hengsheng Group, said it would spend US$7.1 billion to develop a casino resort on the Pacific island of Saipan after winning a licence there.

Amax International stated that for its Vanuatu venture, it expects the junkets to bear the cost of flying customers there. Currently most of the available scheduled air services from China to Vanuatu go via Australia, and take at least 16-and-a-half hours.

Possible incentives for Macau-based junkets to consider taking up Amax International’s offer are the current corruption clampdown on the mainland, that has been inhibiting VIP play in Macau, and also a low tax burden in Vanuatu.

If VAT is levied on in person play, it will be at 12.5 percent, said the filing, which Amax International will ask the junkets to pay.

The Macau government levies a special gaming tax on casino gross gaming revenue at the rate of 35 percent. It also collects about 4 percent of the gross in indirect taxes for social and promotional purposes.

Most Macau junkets no longer make their money from rolling chip commission but by sharing revenue with the casino operators. In the first half of this year, prior to the slowdown in the Macau market, revenue share for the Macau junkets was 40 percent or 42.5 percent according to industry sources.

Even if the Vanuatu tax burden of 12.5 percent on net winnings only, plus payment of transport and accommodation costs has to come out of the junkets’ end, the arrangement could still potentially leave room for them to gain from deals with Amax International an aggregate of more than 40 percent of the revenue generated.

Some mainland players currently unwilling or unable to travel to Macau high limit rooms might also seek to play online. Live streaming of table play via video camera is not allowed in Macau VIP rooms or on the main floor tables. Chinese players are reluctant therefore to make telephone or online bets on Macau casino table games because of the risk of fraud, industry sources have told GGRAsia.

The online gaming licence is held by a Vanuatu company called Chartreuse Holdings Ltd, which is currently 50 percent owned by Forenzia Enterprises.

Chartreuse was granted an interactive gaming licence issued by the Ministry of Finance and Economic Development of Vanuatu for a term of 15 years from February 24, 2014.

The Vanuatu government approved online gaming in 1999 and the Interactive Gaming Act was passed by the Vanuatu parliament in March 2000, according to the filing.

Amax International said Chartreuse “is only subject to the interactive gaming tax of 2.5 percent” on net winnings.

It added: “High rollers will visit the company’s VIP rooms in Port-Vila, Vanuatu, to play baccarat online and the junkets will bear all transportation and accommodation costs of the high rollers.”

The filing said that “in case VAT is payable under such [a] business model, all the VAT will be borne by the junkets”.

The licence deal involves an allotment by Amax International to the vendor of an aggregate of 37,000,000 consideration shares at the issue price, which it said represented a discount of approximately 2.26 percent to Amax International’s closing price of HKD1.33 per share as quoted on the Hong Kong bourse on Tuesday.

Most of Macau’s casino operators are likely to generate positive free cash flow in the first quarter, given the robust recovery level of mass-market gross gaming revenue (GGR) in January, relative... END_OF_DOCUMENT_TOKEN_TO_BE_REPLACED