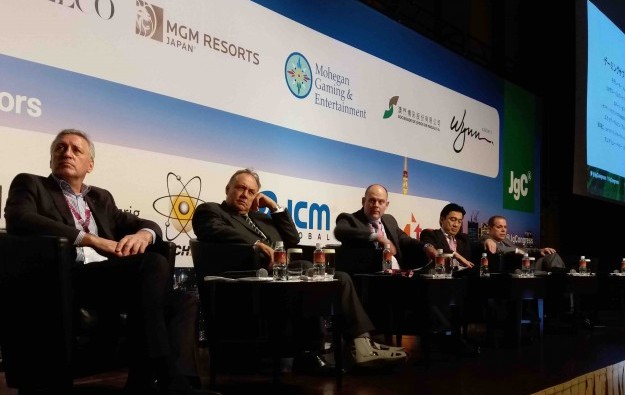 Japan would probably seek to learn from “North American technical regulation”. This was because that regulation had “such a history”, said Yuji Taniguchi (pictured, second right), chief games product and strategy officer for Konami Gaming Inc, a unit of Japanese entertainment conglomerate Konami Holdings Corp.

On that basis, there would in likelihood be similarities – and also significant differences – between the slot machines and other electronic games likely to be seen in a future Japan casino market, and those already seen in Macau, Singapore and Las Vegas, Nevada, in the United States. So heard the audience listening to a panel of gaming equipment suppliers at the Japan Gaming Congress in Tokyo on Friday. The panel was moderated by Tom Nieman, vice president of worldwide marketing for cash handling technology and ticket printer supplier Japan Cash Machine Co Ltd, also known as JCM Global.

Konami’s Mr Taniguchi said Japanese culture could influence “game rule” and “game presentation”, and whether there was a “social” element to the gaming experience.

Notwithstanding the popularity – among local consumers – of pachinko and pachislot, “for Japanese people, simply putting arcade-style games in a casino will not work,” said the executive.

Themes “originally for the child market… should not be applied to Japanese games,” added Mr Taniguchi.

“As for game presentation, my guess is that Japanese manga comic – these sort of characters – could affect our product,” he added.

The Konami executive also noted: “The game must be explainable… if not, it can probably result in ambiguous win-loss determination, and ambiguous fairness…. That’s why we need to resolve these points.”

Mr Taniguchi’s observations addressed specifically the likely interests of Japanese consumers, although the country’s central government has been at pains to stress it wishes via the casino policy to bring in a greater number of foreign visitors to the country.

In April the Japan Tourism Agency said the number of foreign visitors to the nation in the fiscal year to March 31 had risen 19.9 percent year-on-year, to nearly 30 million. Chinese travellers spent in aggregate the most of all the categories of foreign visitor in the January to March 2018 period: JPY439.1 billion (US$4 billion) even without – for the time being – the opportunity to go gambling in casinos.

Ken Jolly (second left), vice president and managing director of Asia for casino equipment supplier Scientific Games Corp, noted to the Japan Gaming Congress panel audience that games in Japanese casinos would have to appeal to a wide range of customers, including people from outside the country.

He stated: “These integrated resorts… are going to be quite large complexes, and are going to drag a lot of different people in: ones that want entertainment; different age groups. The gaming areas are going to need attractive product that suits a very wide range of players.”

“At this stage there are a lot of unknowns,” he told delegates.

Mr Hely added: “The locals market is an interesting one. Because you have got a population that is technically savvy, with a healthy level of disposable income… and a legacy market of pachinko and pachislot.”

He further noted: “With that type of heritage in the market, it may well be that the mix of products we need to bring to market will in Japan be slightly different from other places – possibly with some element of skill.”

Eric Persson (first right), president and chief operating officer at Aruze Gaming America Inc, said games in the Japan market would need to add something different to the mix available in other regulated markets

“It isn’t about building games just for Japanese or just for the foreigners that Japan is looking to bring into the country. What we are trying to do is to add social and entertainment ‘currency’, so that people say, ‘Hey, I want to come to Japan, I want to come to these casinos, and I want to play in this environment,’” he told the audience.

Prior to his current role, Mr Persson was senior vice president of slot operations and slot marketing for casino operator Las Vegas Sands Corp, where he oversaw all slot purchases, mass-marketing programmes, events and promotions.

The other member of the suppliers’ panel was Robert Dijkstra (first left), vice president of business development and sales, Asia Pacific, of Austria-based supplier Novomatic AG.

He told the audience: “We have experience in the European market; our development has mainly taken place there… you can’t take a product out of that market and just put it in another market. You definitely need to localise it and regionalise it, and you have to [understand] what people are used to playing, and what games your competitors are putting out in the market.”

He added: “In the background you also have to think about the games from your own ‘kitchen’: what have you made; what has been successful; and are certain parts of that useful in these new markets?”

Macau gaming operator Wynn Macau Ltd is asking some management-level staff to volunteer to take 10 percent of their monthly base pay in the form of company stock, according to a notice recently sent... END_OF_DOCUMENT_TOKEN_TO_BE_REPLACED