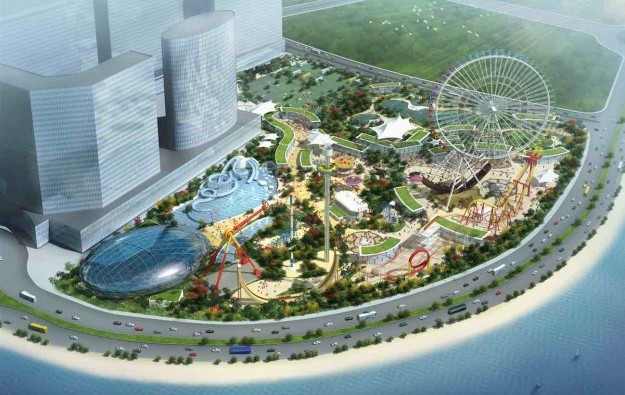 A theme park project (pictured in a 2010 rendering) to be built in Cotai next to SJM Holdings Ltd’s Lisboa Palace casino resort is still waiting for approval from the Macau government. That is according to Angela Leong On Kei, who heads the project’s promoter, Macau Theme Park and Resort Ltd.

She told reporters on Thursday that the park would feature five small hotels that will be themed. But she provided no information on the themes or updates on the overall cost or completion date of the scheme.

The theme park project was first announced in 2010, with a MOP10.4-billion (US$1.3 billion) price tag – excluding land costs – and a focus on family entertainment. At that time it was said the resort was to be developed in three phases and would include an indoor beach with wave pool, amusement rides, an equestrian centre and convention facilities.

At the time, the promoters said the Industrial and Commercial Bank of China had already agreed to lend MOP1 billion for the project.

Macau Theme Park and Resort first applied to the Macau government in 2004 for a 200,000-square metre (2.15 million sq feet) site in Cotai. Owing to the size of the project, it was asked to divide the development into two, with one area for the hotel facilities and another for the theme park. It was granted 106,000 square ms of land for hotel development in 2006, according to official records from the Macau government. The other 94,000 sq ms for the development of a theme park have still not been officially granted to the firm.

SJM Holdings announced in 2013 it would combine its Cotai land resources with those of Macau Theme Park and Resort, to build a casino resort more than three times the size it originally planned.

At the time, SJM Holdings chief executive Ambrose So Shu Fai said the gaming operator was discussing how it could rent Macau Theme Park and Resort’s land. He added he expected the deal would still be concluded in 2013. However, no final agreement was ever made public.

SJM Holdings’s Cotai plot is only 70,500 sq ms, the smallest among the major new Cotai projects built or planned by the city’s six operators.