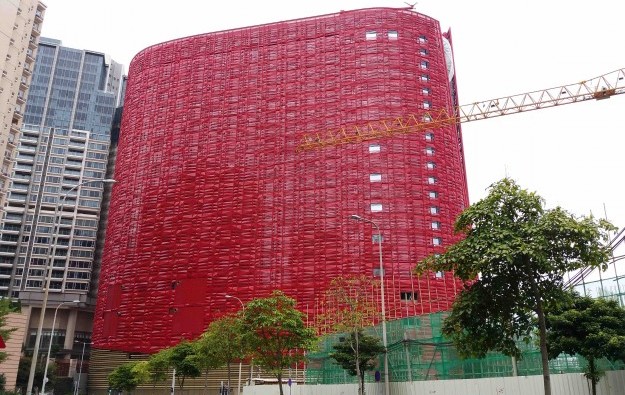 Opinions from the public would be taken into account in any consideration of whether to allow gaming facilities to be established in Coloane, said the city’s Secretary for Economy and Finance, Lionel Leong Vai Tac. He made the remarks on Friday to members of the Legislative Assembly during a debate on the Macau government’s policy address for 2017.

Coloane is a semi-rural area at the southern end of Macau, and has been referred to by some local legislators as the “green lung” of the city.

The secretary’s Friday comments were understood by listeners to refer in particular to The 13 hotel (pictured in a file photo), a property on the Cotai-Coloane border, and promoted by Hong Kong-listed The 13 Holdings Ltd. The company – previously known as Louis XIII Holdings Ltd – has in the past mentioned plans for a casino at the property; but in more recent public statements there has been no mention of gaming facilities at the venue.

Mr Leong outlined in his Friday remarks to legislators that any applications that might be filed by any of Macau’s six licensed casino operators – the competent parties regarding gaming operations in the city – in order to build a casino in Coloane would be referred to the urban planning unit of the city’s Land, Public Works and Transport Bureau. That would happen prior to any government ruling on the matter. Such a referral would be to consider whether any such proposal would be in conflict with the government’s plans for that area.

He added that when the government receives a request from a licensed casino operator to open a new casino, the local authorities must assess “if it fits the government’s plans and whether it clashes with how society is structured”.

The secretary made no mention of who among Macau’s casino operators might wish to establish a casino in the Coloane area. But he reiterated there were no restrictions in existing legislation to limit where casinos can be built.

The land grant for the plot where The 13 hotel is being built does not mentioned a casino. But, according to Macau’s rules, a casino operator could still request  government authorisation to set up a casino there.

GGRAsia asked the city’s casino regulator, the Gaming Inspection and Coordination Bureau, whether it had received a request for a new casino to be established inside The 13. The gaming bureau said in an email sent to us on Monday: “As of now, we have not yet received from any one of the gaming concessionaires a request to open a new casino in The 13 hotel location.”

The launch of The 13 hotel has been pushed back to “early 2017″, said the project’s promoter in a press release in September. At the time the company did not provide any reasons for the delay.

The 13 hotel aims to position itself in the ultra-luxury segment, its promoter has said. The firm had previously stated that the average construction cost per room was more than US$7 million (HKD54.3 million) – an aggregate construction spend of more than US$1.4 billion for all the rooms in the property. It is described as an all-villa hotel with 200 accommodation units.

Macau’s casino gross gaming revenue (GGR) for the first five days of February is estimated at MOP1.9 billion (US$235.1 million) – or MOP380 million per day – a level that suggests a “45... END_OF_DOCUMENT_TOKEN_TO_BE_REPLACED