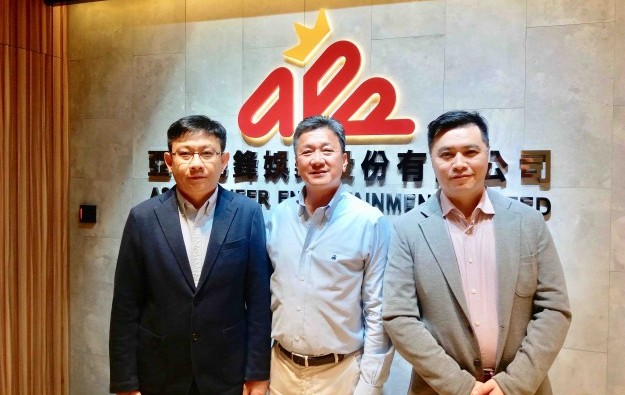 Electronic casino game distributor Asia Pioneer Entertainment Ltd (APE) is looking to expand that business in the Asia-Pacific region, and develop further its maintenance and servicing operation in its home market of Macau.

Factors in support of that expansion include the growth of the casino sector in Vietnam and the Philippines, and the increasing trend of Macau’s casinos to outsource machine technical support to third-party service providers, rather than doing things in-house.

So said Allen Huie (pictured centre), chairman and executive director of APE, as part of a GGRAsia interview with senior management for the group.

Regarding prospects beyond Macau, the chairman told GGRAsia: “We are increasing our sales, we are expanding the number of our people and our relationships in the Philippines, in Vietnam. Those places in the next couple of years are going to provide significant growth for us.”

As the distributor’s reach grows in the region, so will the reach of some of the brands it works with, Mr Huie suggested.

“What we have done with a lot of our OEMs originally, was for Macau. We have now expanded their exclusive distribution coverage – in most cases for the region, or several countries in the region,” he told GGRAsia.

The firm’s roster of supplier partners includes some of the mid-sized manufacturers that already have proven products in the region. The Konami brand of casino equipment, produced by part of Japan’s Konami Holdings Corp is one; another is Spintec d.o.o. from Slovenia; a third is Jumbo Technology Co Ltd from Taiwan.

The growth in the machine servicing part of the business in Macau is linked to a number of factors including the willingness of casino operators in the city to outsource some functions, stated Mr Huie.

The chairman referred to the opportunity for the Macau-incorporated operating company of APE to import labour for technical roles. The city has statistical full employment and the government gives preference to high-grade jobs for locals rather than reliance on buying in expertise from outside via a non-resident visa system known locally as a “blue card”.

Mr Huie said: “Because we are a Macau company and have been in the market a long time, we have been able to get the technical people approved for the blue cards as well as the people with local ID for jobs… Many of the casinos themselves are reducing their technical staff. So that means we are increasing that repair business.”

APE suggested it had the edge in the local machine distribution sector market due to its size relative to other local distributors, and had tackled a clear barrier facing outside firms: the fact that it has the necessary licence from the local casino regulator, the Gaming Inspection and Coordination Bureau – a body also known as DICJ – to pursue such business.

“There are two types of licences from the DICJ: one is called a manufacturer licence,” stated Mr Huie.

“Big firms like Aristocrat register and fully pay up as a manufacturer… then they can go and sell,” he noted. But Mr Huie observed: “There’s a trend that even the big ones [makers] may not want to go through this.”

Those that don’t have a manufacturing licence have to go through a licensed distributor.

Tony Chan (pictured right), APE’s chief financial officer, noted there had also been consolidation in the Macau distribution market after changes locally to the rules regarding capital requirements for such enterprises.

“Last year DICJ increased requirements for holding this licence. They now require the company to be an ‘SA’ [Macau-incorporated] company, and it must have a minimum of MOP1 million [US$123,691] in registered capital,” Mr Chan said.

Mr Huie added: “A lot of the small guys who had done it before, have now gone from the market.”

The chairman noted that “more than 90 percent” of the group’s business was distribution of new machines, but it also sells refurbished products to some markets outside Macau. These are typically sourced either from machines that the Macau operators have finished with, or that have come from a regional casino business in distress, said Herman Ng (pictured left), the group’s chief executive and an executive director.

Gross margins on sale of refurbished machines are typically 50 percent and above, versus 30 percent on new machines, he said.

Mr Ng stated: “If a casino closes down or goes bankrupt suddenly, if your timing good, you can maybe get all the new machines for a very very cheap price.”

He noted that refurbished sales were typically to markets with more lax casino regulations, including Cambodia and Laos in Indochina.

APE also has a consultancy business that works with small-scale manufacturers that are trying to get their product to market in Macau or beyond.

“In terms of Macau standards, in terms of knowledge of the jurisdiction, there is a lot of technical stuff that they [market newcomers] don’t know,”said CEO Mr Ng. “These are things I do know, and the casino operator knows. So sometimes they [the casinos] refer a product back to us.”

In the first eight years of APE’s circa 12-year existence, “I would find them,” said Mr Ng, referring to new products from small new suppliers. Since then, it has “usually been a referral from a casino” that spurs APE’s interest he added.

Chairman Mr Huie noted: “If you can successfully incubate a new product, you can potentially make a lot of money… Now we have got the expertise and the relationships, we will be doing more of that. We hope we will see some good ones coming out soon,” he added.

Mr Ng stated that there were significant challenges in trying to create a casino equipment manufacturing sector in Macau – as opposed to an operation where machines are shipped in from elsewhere for final assembly. Difficulties included a lack of readily-available expertise locally.

“During these past five years there are people that keep thinking about this in Macau…But it’s so expensive. Every single programmer, you have to hire from outside,” he noted.

The imminent return of package tours from mainland China will not only help boost Macau’s tourism businesses, but is also expected to help casinos gain more foot traffic in their mass gaming... END_OF_DOCUMENT_TOKEN_TO_BE_REPLACED