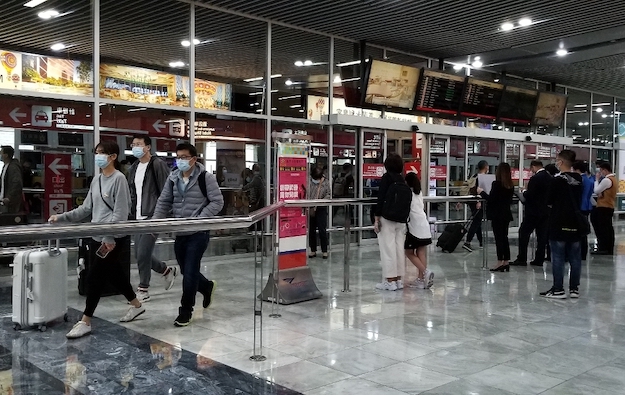 Macau’s airport expects a circa 26-percent-higher volume of passenger movements in April compared to March, according to information it provided to GGRAsia.

Based on requests so far this month, flights by: Cambodia Angkor Air; Cambodia Airways; Lanmei Airlines; and Scoot Tiger Airlines, are to run flights between Macau and respectively, Phnom Penh, Cambodia, Sihanoukville in Cambodia, and the city-state of Singapore. But such planned flights could change, subject to airlines’ final arrangement, CAM said.

In March, Macau airport handled 1,311 commercial flight movements, higher than its initial estimate of only 1,166.

During March, a total of 13 airlines linked Macau to 24 destinations, a majority in mainland China, according to CAM.

The Chinese cities of Jinjiang and Fuzhou – both in Fujian province – were also among the March flight destinations, and were served by Xiamen Airlines.

The other destination covered in March was Taipei in Taiwan, via services run respectively by Air Macau, EVA Air, and Starlux Airlines, according to CAM. In that month, Macau’s airport also handled charter flights to Manila, in the Philippines; Yangon, in Myanmar; and Danang and Hanoi, in Vietnam, run respectively by Philippine Airlines, Myanmar National Airways and Vietnam Airlines.

In the first quarter, Macau’s airport handled 203,406 passenger movements: 78.3 percent fewer than the same quarter last year, when the tally was 936,246. In the first three months of 2020, most of the arrivals were in January before the onset of the pandemic, the CAM data had indicated.

Macau has recently seen a steady uptick in the number of visitor arrivals, the Macao Government Tourism Office (MGTO) said in a Sunday release.

The average daily volume was 27,404 visitor arrivals for the seven days from April 9 to April 15 inclusive. On April 16 – a Friday – the tally was 34,252 arrivals, the highest daily count since the start of the Covid-19 pandemic last year, MGTO said.

China has moved one step closer towards reopening, by relaxing some its Covid-19 control measures, with most infected people now able to quarantine at home rather than in state-sanctioned... END_OF_DOCUMENT_TOKEN_TO_BE_REPLACED