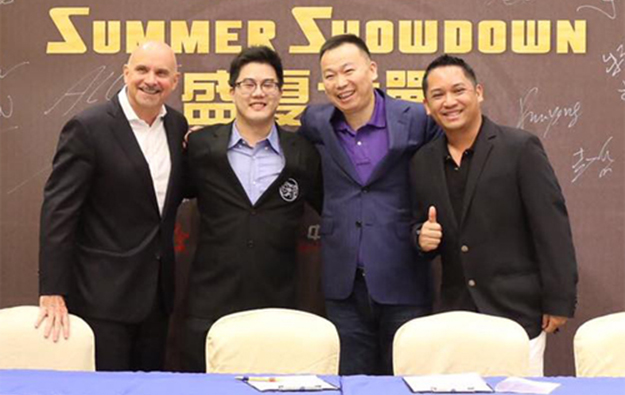 The Asia Poker Tour (APT) has signed an exclusive agreement with Macau Billionaire Poker and the Babylon Casino to bring a minimum of two international poker events per year to Macau for the next five years.

One of the guaranteed events is APT’s year-end poker festival and Player of the Year celebrations, staged every December, the organisers of the tour said in a Monday release.

“Put bluntly, for our next stage of growth and expansion, APT now needs a permanent base in Macau,” Jeff Mann, chief executive of the Asian Poker Tour (pictured, first left), said in a statement included in the release.

The APT was founded in 2008 and held its first event in May that year, in the Philippines capital Manila. To date, the tour has reportedly staged more than 60 major events and numerous smaller tournaments mainly in the Asia-Pacific region. The tour has visited South Korea, Cambodia, the Philippines, Macau, India, Australia, London in the United Kingdom, Mauritius and Vietnam.

It has so far organised eight events in Macau, according to Monday’s release. It returned to the city in 2016 after a three-year hiatus.

The first event under the new APT-Macau Billionaire Poker partnership will be the APT Finale Championships Macau 2017. It will be held at the Babylon Casino from November 29 to December 9, subject to regulatory approval, according to Monday’s release.

“For too long Macau has been restricted in terms of the variety of poker tournaments on offer which we believe has restricted the growth of poker not only in Macau but also in Asia,” Tim Chen, chief executive of Macau Billionaire Poker (pictured, second right), said in a statement included in APT’s release.

He added: “Given the incredible growth and following for poker from mainland [China] players, more professional tournaments are needed. The APT is an established and well respected brand in Asia and viewed by many as the best poker tournament organiser in the region.”

In June, the APT had already organised an event – the APT Macau 2017 – at the Macau Billionaire Poker room.