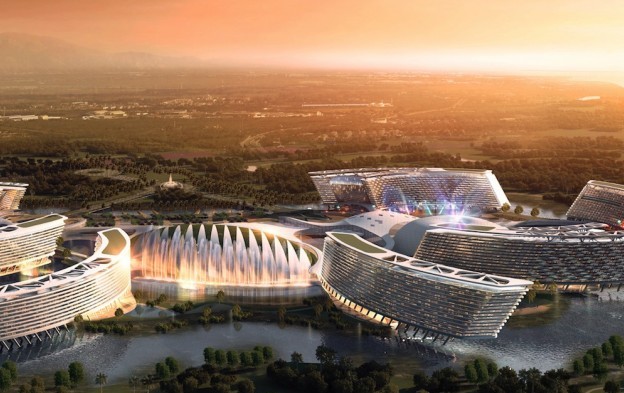 Aquis Casino Acquisitions Pty Ltd has put plans to build an AUD8.15-billion (US$7.0 billion) Australian casino resort (pictured in an artist’s rendering) under “review”. The decision came after the company’s offer to take over an existing casino property in the state of Queensland lapsed following delays in getting the necessary regulatory approvals.

The casino resort project – dubbed Aquis Great Barrier Reef Resort – envisions a development with 7,500 hotel rooms, gaming facilities, a golf course and a water park on a site north of Cairns on the Queensland coast.

The nearby Reef Hotel Casino is currently the only casino property in Cairns.

The latest Aquis announcement on Monday outlining the importance of linkage between the Reef Hotel Casino takeover and the new project, was made after the Queensland Office of Liquor and Gaming Regulation advised it would not be able to grant all gaming regulatory approvals to the deal by November 28, the expiry date for Aquis’ offer.

Aquis in November 2013 announced a takeover bid for Reef Casino Trust, which owns Reef Hotel Casino. The trust is controlled by Accor SA and Casinos Austria AG. Both were in favour of the deal.

“Aquis remains committed to being a major investor in Cairns and in far North Queensland and is continuing its work towards progressing its proposed integrated resort development,” the company stated.

But it added: “Completing the Reef Casino Trust takeover offer in 2014 was always important to Acquis’ overall financial and investment plans. In this respect, Aquis will be undertaking a strategic review of its plans and development timetable over the coming months.”

The firm said it could still reconsider an acquisition of Reef Casino Trust next year, but “there is no certainty any such transaction would eventuate”.

Aquis had previously said the purchase of the Reef Hotel Casino was a relevant part in its development plan for the Cairns integrated resort. “The Reef will provide a strong branding and operational platform ahead of the planned opening… in 2019,” it said in an earlier statement.

The firm is still going ahead with the acquisition of Casino Canberra, in Australia’s administrative capital, it stated on Monday’s announcement.

That deal was initially conditional to the Reef Casino Trust takeover. Aquis and the vendor of Casino Canberra, Casinos Austria, have agreed to proceed with the transaction, to be completed before Christmas at a reduced price of AUD6 million from AUD8.85 million, subject to regulatory approvals.