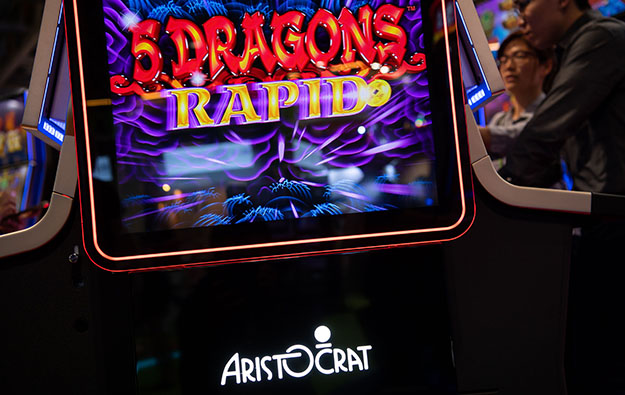 So said its chief executive Trevor Croker in a prepared commentary to shareholders for the firm’s annual general meeting (AGM) held in New South Wales, Australia on Thursday.

He noted that in financial year 2018, ending on September 30, the international segment – including casino slot machines supplied in Macau and other Asia-Pacific markets – had some volatility in its financial performance, because there were fewer large land-based casino projects opening compared to financial year 2017.

He stated: “International Class III revenue and profit decreased 6 percent and 11 percent respectively to AUD202 million [US$144.6 million] and AUD100 million compared to the prior calendar year, as the business cycled over a concentration of new openings in Macau, the Philippines and South Africa in the prior year.”

But he added, regarding the international segment for land-based machines and referring to a slot machine product with a linked jackpot system popular in Asia: “Underlying performance remained strong across the segment, driven by ongoing penetration of Lightning Link across the Asia-Pacific region, where the business is continuing to focus on floor optimisation strategies in line with market maturity.”

Aristocrat Leisure – in common with a number of other casino games suppliers – has in recent years looked to expand its digital online business as a way of providing recurring revenue and stable returns for shareholders in the absence of bricks and mortar casino expansion.

Mr Croker noted in his lookahead commentary during the AGM: “We anticipate lifting design and development investment across our land-based and digital portfolio – in absolute dollar terms – while remaining broadly in line with the prior calendar period as a percentage of sales.”

He also mentioned the likelihood of a “moderate growth” in corporate costs, “as we build the appropriate infrastructure to grow a more complex and diverse business”.

The prepared remarks did not address specifically the player lawsuit in Washington state in the United States – publicised this week – concerning social games provider Big Fish Games, which the Aristocrat group acquired in January 2018.

The lawsuit against Big Fish Games alleged that because money had to be paid by players in order to replenish virtual chips once the originals were exhausted via free-play social games, this amounted to a form of gambling.

The CEO did however indicate that the broader – i.e., non-casino-style – social games market was one that the company wished to pursue via digital products because of market size.

“To continue to grow in digital, we must compete in the broader social games segment, which represents a US$50 billion market – 10 times larger than the total social casino market,” stated Mr Croker.

In late November the Aristocrat group – which includes the U.S.-based slot operation Aristocrat Technologies Inc as well as a suite of digital platforms – had reported net profit after tax for the fiscal year up 9.6 percent year-on-year, on revenue up 44.7 percent.

Mr Croker said at the time that 65 percent of group revenues came from recurring sources – including gaming operations and digital social casino – during the reporting period.

In his latest remarks, the Aristocrat Leisure boss said that its online games platforms Product Madness, Big Fish and Plarium had – as of year-end – recorded respectively 2 million, 3.6 million and 2.5 million daily active users.

The CEO said that in U.S. dollar terms, total digital “portfolio bookings” increased by more than 245 percent to just over US$1billion during the 2018 financial year.

He added segment profit had grown 172 percent to US$330.8 million, driven by acquisitions and – within Product Madness – “the ongoing performance of Heart of Vegas, the Cashman Casino app and the early successful scaling of Lightning Link”.

The CEO also noted however that segment margins for social gaming “moderated to 32.8 percent” during the reporting period, due to “a more diverse portfolio that included lower-margin, but still incrementally-profitable, social casual games”.

Aristocrat Leisure’s chairman Ian Blackburne – who retired from his post following Thursday’s AGM, said in his remarks that over the previous 10 years, the board had turned an “underperforming business,” into a “high-quality commercialisation platform capable of delivering long-term growth for our shareholders”.

He added: “Around two-thirds of total group revenues now come from recurring sources. This compares to a decade ago, when only around 10 percent of group revenues were recurring in nature, and performance volatility was a significant challenge for the business and shareholders alike.”

The incoming chairman Neil Chatfield said his focus – with board backing – would be “continuity”, in order to “maintain a track record of high-quality profitable growth, aimed at providing shareholders sustainable and superior returns over the long term”.

It is likely that Macau will shortly have a third round of citywide centre-based Covid-19 testing in little more than a week, after the results so far of a second mass test – that was due to finish... END_OF_DOCUMENT_TOKEN_TO_BE_REPLACED