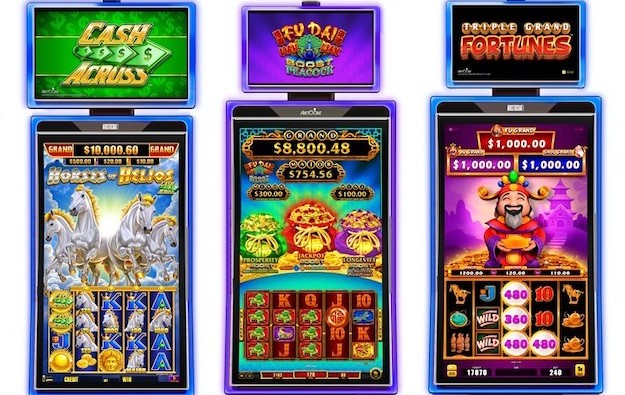 As the name of the new cabinet suggests, it has a screen of portrait-style dimensions. The main display has a 43-inch curved monitor supporting ultra-high-definition graphics. According to the equipment brand, the monitor is tall enough to capture the excitement of the group’s latest game graphics.

The “Cash Across” family of games was created for “core players who thrill to the excitement of big wins, reel expansion, and jackpot potential,” said the brand. Launch titles are “Horses of Helios” and “Savanna Lion”.

Inside the cabinet, is Aristocrat’s latest operating technology, referred to as “Gen9”, which the brand says helps deliver speedy video reel graphics.

The MarsX Portrait cabinet is also said to include a “specially-designed chimney” that “redirects heat” from the player interface, and from critical components in the cabinet.

The cabinet’s curved screen is said to have a 4k display capable of showing 16.7 billion colours.

The MarsX Portrait also has a “virtual” button deck, including a so-called bash button for the players, and wireless USB charging capability for players’ personal digital devices.

The graphics include game reels that expand in size, and players are offered multiple levels of jackpot.

The MarsX Portrait can accommodate a bill validator and a ticket and voucher printer, and has dedicated cash drop doors, and a “pop-up track” for ticket printers.

The topper for the cabinet – designed to attract casino-customer attention on the gaming floor – is described as having graphics in “super-high definition”.

The year 2024 is still the targeted start date for operation of a five-star hotel and casino complex at the Westside City Project (pictured in an artist’s rendering) in Manila, the Philippine... END_OF_DOCUMENT_TOKEN_TO_BE_REPLACED