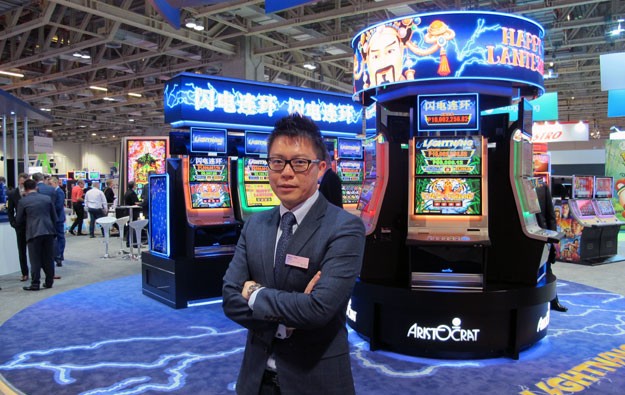 South Korea currently has 18 casinos but only one – Kangwon Land in a remote upland area – is allowed to serve South Korean nationals. Aristocrat’s regional marketing manager for Asia Pacific, Miguel Choi (pictured), says however that South Korean players are an important part of the client mix in other regional markets.

5 Kings is based on Korean mythology. The game is available in dual-language mode – English and Chinese – and should start being available on casino floors across Asia as early as next month, Mr Choi said.

“This is our best-selling product globally now,” Mr Choi said. It is already available in Macau, the Philippines and Vietnam.

At the trade show, the slot supplier is displaying two games for Lighting Bolt tailored for the Asia market: “Dragon Riches”, with a dragon theme; and “Eyes of Fortune”, with a tiger-related theme. The latter game is set to debut later this year.

Aristocrat is also displaying at G2E Asia new extensions of what is arguably the firm’s most popular brand in Asia: “5 Dragons”. Extensions include “5 Dragons Empire”, a new four-level “Hyperlink” jackpot game; and “5 Dragons Rapid”, with features coming up more frequently to engage players and add excitement to the gaming experience, said Mr Choi.

5 Dragons Rapid has already been launched in Vietnam and in the Philippines. It has also gained regulatory approval in Macau and should soon start hitting gaming floors around the city, Mr Choi said.

The three-day G2E Asia 2017 trade show is taking place at the Venetian Macao casino resort. The event ends on Thursday.

A casino cruise brand reportedly controlled by Malaysian entrepreneur Lim Kok Thay is to launch services from Singapore fewer than five months after the Lim family-founded Dream Cruises brand of the... END_OF_DOCUMENT_TOKEN_TO_BE_REPLACED