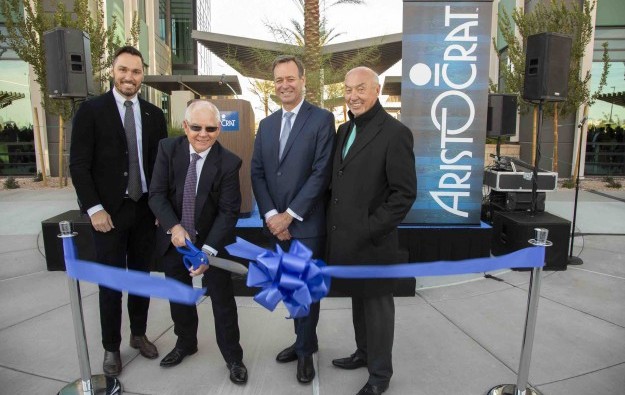 A ribbon-cutting ceremony was attended by Aristocrat Leisure’s chairman Ian Blackburne (pictured centre left), chief executive Trevor Croker (centre, right) and the Americas managing director Matt Wilson (left). “Creating an inspiring environment for employees is critical to our success and to our culture, today and in the future,” Mr Wilson said, as quoted in a press release issued n behalf of the company. “The new building will further enhance our ability to work together by providing a functional environment that sparks collaboration and innovation,” he added.

The campus comprises two three-storey buildings with open-plan floors, plus a park, at 10200 Aristocrat Way in the Summerlin district of Las Vegas. The park is named Blackburne Park, after the Aristocrat Leisure chairman, who has said he will retire from the board of the company in February.

At a corporate level, since last year Aristocrat has relocated a number of senior executives from Australia to the U.S., including Mr Croker. Many of the Australian group’s biggest customers are based in the United States.

“I don’t see any impact from the movement of management. We are still very much an Australian company, listed on the Australian Stock Exchange,” Chris Rowe, the firm’s managing director for Asia Pacific, told GGRAsia at the MGS Entertainment Show 2018 in November.

“We have a lot of autonomy as an Asia-Pacific region [unit] and we run ourselves as a business unit receiving great support [from management]. That great support can come from anywhere, as long as the games keep flowing in,” he had added.

Aristocrat Technologies’ parent Aristocrat Leisure reported a net profit after tax for the fiscal year ending September 30 of AUD542.6 million (US$396 million), compared to AUD495.1 million in the same period one year earlier. Revenue for fiscal 2018 reached nearly AUD3.55 billion, compared to AUD2.45 billion a year earlier. In year-on-year terms, net profit was up 9.6 percent and revenue up 44.7 percent.

The Macau government announced on Thursday the cancellation of a plan for a nucleic acid test certificate requirement with 48 hour validity, for casino staff and construction site workers, that had... END_OF_DOCUMENT_TOKEN_TO_BE_REPLACED