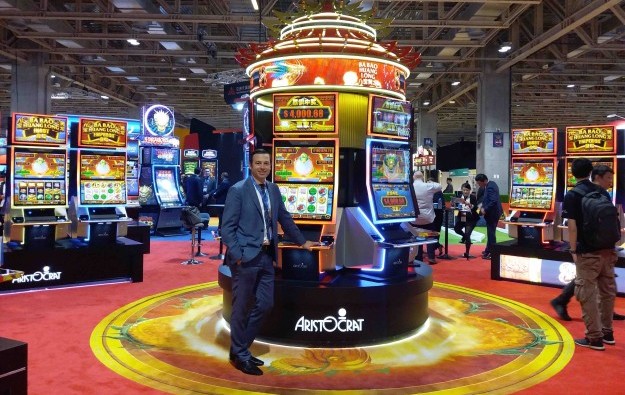 The hardware took centre stage on the brand’s stand at the casino trade event and conference held at the Venetian Macao casino resort.

The cabinet – featuring games such as the firm’s “Ba Bao Huang Long” link  – was showcased in several setups, including an eye-catching carousel arrangement.

A new “mainsteam cabinet” for the supplier was a “once-in-every-five years kind of event… so that’s our number-one focus,” stated Lloyd Robson (also pictured), Aristocrat’s sales and business development director – Asia Pacific, in an interview with GGRAsia.

The slot platform and its accompanying games first went live in Asia only weeks ago at City of Dreams Manila, a property run by a unit of Melco Resorts and Entertainment Ltd, and is likely to be on Macau casino floors soon. It was introduced into the United States a few months ago.

In the U.S., “any” Aristocrat game carried on it had been “flying” performance-wise, the executive noted.

A key aim of the MarsX was to help Asian casino operators refresh the look of their slot floors.

In the U.S., “you see very diverse floors from a hardware point of view,” he said, adding the floors in Asia-Pacific generally “look the same”.

MarsX’s predecessor, the Helix cabinet range – now five years in the market – had set a standard for the market, but also led to rivals creating lookalikes, the executive suggested.

The Ba Bao Huang Long link showcased on MarsX at the MGS Entertainment show, is “a game specifically built for Macau and the player base in Macau,” said Mr Robson.

“That’s our first link in two or three years specifically for Macau,” he told us. “It takes some of the hallmarks from our most successful link, ‘Good Fortune’, which has been in Macau for five years; but there are a number of innovations in mechanics, that sit on the top of that.”

In terms of unit shipment performance in 2019 and looking ahead to 2020, the Philippines is a key market for the Aristocrat brand.

“That’s a combination of some new licences; some expansion activity” in the casino sector there, Mr Robson noted.

The Aristocrat executive said the “heroes” product-wise in that market this year had been “Lightning Link”, “Mighty Cash”, and “Gold Stacks 88”. The latter “hit the market there in the last three or four months, and is leading to repeat purchasing now with all the big integrated resorts,” he told GGRAsia.

Looking ahead to 2020, Mr Robson said the firm was “making some people changes” in the Philippines, “focusing more on that market”.

In Macau, the firm has been investing more intensively “than we might have in years gone by”. “We are starting to reap the benefits of that from a game point of view,” he stated.

In Asia-Pacific as a whole, Aristocrat has “seven or eight” key link product titles for the region, of which  “three or four” had been “specifically built” for those markets.

In terms of games, Aristocrat says it segments its portfolio by “innovation” and “brand extensions”, i.e., updated versions of existing, popular games.

“The market in Macau is quite brand-centric, so iterations tend to perform best; something they are familiar with,” he stated.

In the Macau market the brand had brought in to its workforce “some local graduate talent” as part of a second phase of the graduate training programme it had initiated, said Mr Robson.

Elsewhere in Asia, Aristocrat had performed well commercially in 2019 in Indochina.

“We have sold more machines into Cambodia than we have in a while, excluding an opening or expansion like Naga[World],” said the executive, referring latterly to the casino resort run in Phnom Penh by Hong Kong-listed NagaCorp Ltd.

“In Vietnam we are a dominant player with very strong [market] share. They have picked up on some of our new standalone product down there,” stated Mr Robson.

The Macau government announced on Tuesday tightening of its Covid-19 testing requirements for front-line casino staff, halving the interval between nucleic acid tests to every two days, from every... END_OF_DOCUMENT_TOKEN_TO_BE_REPLACED