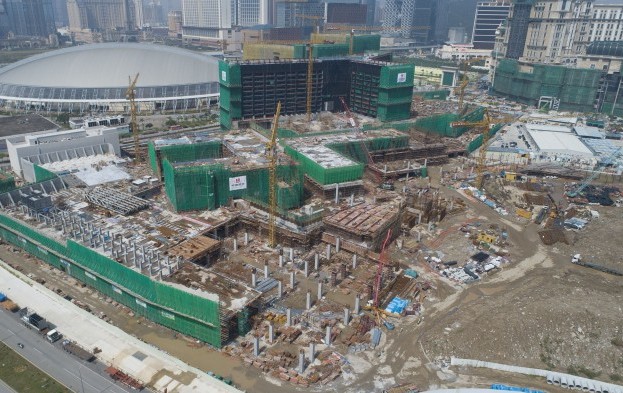 An under–construction project for a new HKD5-billion (US$637.8 million) Cotai resort fronted by a son of Macau gaming entrepreneur Stanley Ho Hung Sun was only revealed publicly on Thursday at a press conference in the city.

But Arnaldo Ho Yau Heng said it would be “up to the government” whether the scheme would be able to have a casino.

“Lisboeta Macau” (pictured) was started in August of 2017, and the project was topped out this August, the media learned on Thursday, the first public announcement about it.

The project, with four-star accommodation, is on land near to the under-construction Grand Lisboa Palace casino resort. The latter is promoted by Hong Kong-listed SJM Holdings Ltd, which holds a Macau gaming licence via its local unit Sociedade de Jogos de Macau SA. Over the summer, Arnaldo Ho was confirmed as assistant chief operating officer of the latter firm.

It was not clear from Thursday’s press event what formal links – if any – Lisboeta Macau, flagged as having a possible “2020″ opening date, has to the SJM group of businesses.

Arnaldo Ho was referred to at that day’s presentation as a director of Macau Theme Park and Resort Ltd, described as the entity that was developing and would manage the project. The venture is being referred to as an “integrated resort”. In the gaming industry, that is usually a euphemism for a large-scale leisure facility with a casino as well as hotel and shops.

Arnaldo Ho told media: “At this moment, this project does not contain any gaming elements… we are not a casino operator and now this project is meant as a hotel complex site; and we are a hotel operator.”

But he added, referring to a possible gaming partner: “I cannot comment now who we will be partnering with.”

In the Macau market, third-party investors – typically Macau or Hong Kong business people – have since the days of Stanley Ho’s monopoly been allowed to get access to table quota and gaming rights by tying with an existing licensee under a so-called service agreement. SJM Holdings has been the most active in this segment in the post-monopoly era.

“If you ask me whether I want it [gaming elements] to be featured, of course I would want them. Because having gaming elements is a good thing in the sense that it enriches the project. But it really depends on the interest of casino operators and the government,” Arnaldo Ho added.

Arnaldo Ho declined to say how Macau Theme Park and Resort might collaborate with SJM Holdings. But he suggested that Lisboeta Macau and Grand Lisboa Palace might be able to achieve what he termed “synergy” in terms of boosting visitor flow. The HKD36-billion Grand Lisboa Palace is relatively isolated at present, being further from the Cotai Strip – a cluster of casino resorts – than any of its rivals.

The opening of Grand Lisboa Palace is due by the second half of 2019, according to SJM Holdings’ interim results.

“If we can build a bridge to connect the two projects, they will enjoy an improved visitor flow,” Arnaldo Ho said at Thursday’s press event.

He noted: “Grand Lisboa Palace is a five-star, [and] six-star, large-scale and luxurious property with 2,000 guest rooms; and we go for a more family-oriented resort. So when we are integrated that will bring the two projects an advantage.”

The Lisboeta Macau project is due to have 820 rooms and suites, housed in a 12-storey tower with a Y-shaped floor plan, according to Arnaldo Ho’s presentation.

The hotel complex – all to be operated by Macau Theme Park and Resort – would have three hotel brands: “Lisboeta Hotel”, with 574 rooms; “Maison L’Occitane”, with 164 rooms, and “Casa de Amigo”, which will house 82 rooms. The latter two themed hotels would be a collaboration with, respectively, French cosmetic brand L’Occitane and Line Friends, characters associated with the Line social media software app. It is said to be the first such themed hotel collaboration for each brand.

The overall concept for Lisboeta Macau was a “Macau-themed” resort, with elements that “pay homage to old Macau”, said Arnaldo Ho. An exterior wall of the hotel tower would have a reproduction of the mosaic facade of the shuttered and soon to be demolished Hotel Estoril located opposite Tap Seac Square in downtown Macau. The latter was Stanley Ho’s first foray into the Macau hotel business after winning his original monopoly in 1962.

There would also be at the proposed new site a replica of the former floating casino Macau Palace that was run by his father’s legacy organisation. The facsimile would house an exhibition area and a Chinese seafood restaurant.

In modern Macau there was a “lack of a project that truly represents Macau,” said Arnaldo Ho.

He added: “When I looked at my father’s developments in the [19]60s of Macau, I felt that those are not very well-recognised and as his son, I should inherit those elements and introduce them.”

Angela Leong On Kei, the mother of Arnaldo Ho and who is also Stanley Ho’s fourth consort, is an executive director at SJM Holdings and a Macau legislator.

The Lisboeta Macau project would have two themed zones: “Retrospective Macau”, and “Future Macau”. The entertainment portfolio of the project includes: a zip-line ride that would allow more intrepid visitors to view the property from height; an area described as an “indoor skydiving spot”; and a cinema. The latter is said to be of a “Gatsby themed” design – understood to be a reference to the style and architecture featured in the 1925 novel “The Great Gatsby”, by F. Scott Fitzgerald. It would be run by the Hong Kong-based Emperor Cinemas.

Arnaldo Ho declined to reveal how Lisboeta Macau would be financed and what its earnings potential might be, citing confidentiality, but he said the HKD5-billion price tag included construction and land costs.

When asked if he was concerned about the viability of the scheme if it could not have a casino, Arnaldo Ho said visitor numbers to Macau had been increasing in a stable manner.

“I don’t see this project will just go for the existing market clientele. The clientele I’m going for is… family [travellers]. This is a four-star resort and the pricing will be benchmarked against other four-star hotels in Cotai.”

He added: “This project is next to Grand Lisboa Palace… Hotels survive in Macau even they don’t have a casino.”

Macau Theme Park and Resort first applied to the Macau government in 2004 for a 200,000-square-metre (2.15 million-sq-foot) site in Cotai. Owing to the size of the project, it was asked to divide the development into two, with one area for the hotel facilities and another for the theme park. It was granted 106,000 square metres of land for hotel development in 2006, according to official records from the Macau government. The other 94,000 square metres for the development of a theme park – of so far undisclosed content – have still not been granted to the firm.

“The Macau government has never granted us this other half of the plot,” said Mr Ho, referring to the 94,000-square metres that is yet to be developed. “We would hope very much the government can give us a chance to try to develop a true theme park for Macau [on the site].”

“The Land Law [of Macau] that was amended in 2014 has posed several issues to us, so the plan [for building a theme park] was not granted,” Mr Ho added. He noted Macau Theme Park and Resort had decided nonetheless to move ahead with the Lisboeta Macau portion.

According to Thursday’s press event, other directors of Macau Theme Park and Resort Ltd are Angela Leong, Lee Wai Man and Li Chi Keung. Mr Lee is known as the founder and leader of the city’s veteran junket firm Macau Golden Group.