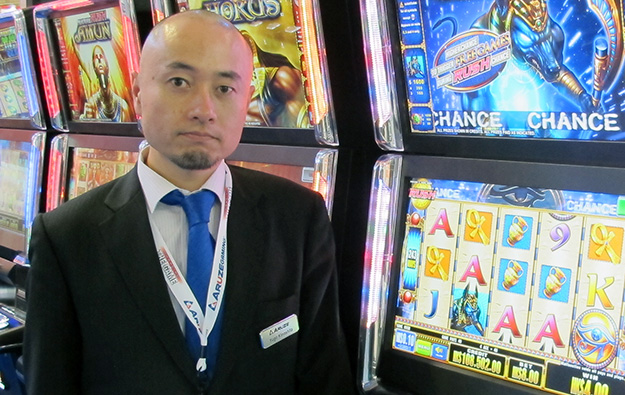 “We are in the process of looking for new opportunities,” Mr Kinoshita told GGRAsia. “We are going to do something very new.”

The executive said that, as the casino supplier market becomes increasingly more competitive, the firm was “seeking something different from other companies”.

Mr Kinoshita confirmed that the research and development process for the new products was well advanced. He added that the new Aruze Gaming offering should arrive in Asia – namely Macau and the Philippines – by year-end.

He did not disclose further details on the new products the firm is developing.

Aruze Gaming is a strong player in Asia in the ETG segment. But brokerage Union Gaming Securities Asia Ltd says growth in ETGs seats in the region is likely to slow dramatically until the end of 2018, as the pace of new casino resort openings in Asia begins to slow.

“With the bulk of Macau’s new development wave now in the rear-view, and some of the more meaningful developments more than a few years away (e.g. Japan), our forecast of new ETG seats is rather modest through the end of 2018 at only 1,150 new seats,” said analyst Grant Govertsen in the brokerage’s annual report on ETGs in Asia, published on May 19.

Mr Kinoshita agrees that 2017 could be a tough year for Aruze Gaming in Asia due to the opening of fewer casino resorts in the region as compared to 2016.

“The Asian market is sometimes very tough for us: it is really subject to new casino openings,” he said. “Once there are new casinos, we can ship 200 or 300 units – there is huge demand. If not, we need to just aim for replacements.”

There is only one large casino resort scheduled to open in Asia in the second half of 2017: MGM Cotai, in Macau’s Cotai district.

“Asia is an ETG market. So we are going to strengthen more and more our ETGs,” said the firm’s COO. “But also on the slot machine side, we have now better games, higher performing games compared with last year.”

The firm has affiliates in Macau, the Philippines, Japan, Hong Kong, Australia and South Africa.

“One of the good things is that, since we are [firms with] close [ties] – and within the regulations and compliance standards – we can let many of our research and development guys, many of our engineers, go to the Philippines to see the casino,” said Mr Kinoshita, adding this was helpful for new product development. “We can get more insight from players at Okada Manila. We definitely get some advantage from their feedback.”

Aruze Gaming is also following the casino legislation process in Japan. While Mr Kinoshita foresees the Japanese market to be small in terms of overall gaming machine numbers, he says Aruze Gaming could have a competitive advantage in developing products tailor-made for that market.

The executive added: “But beyond market size, our research and development is mostly in Japan. One of our potential success factors is that they have access to pachinko and pachislot machines.” Mr Okada’s Universal Entertainment is a major supplier of those products.

“So when there are casinos in Japan, our research and development team might have access to huge lessons from the pachinko and pachislot industry that can be useful in creating totally different slot machine games from those in North America or currently in Asia,” Mr Kinoshita said.

Legislation making casino gambling legal in Japan came officially into effect on December 26. That piece of legislation – referred to by its supporters prior to its enactment as the Integrated Resorts Promotion Bill – got the final approval from Japan’s parliament on December 14.

A Macau court was offered evidence on Monday, including of recordings from police-wiretapped telephone conversation, that the prosecution says proves the direct involvement of Levo Chan Weng Lin... END_OF_DOCUMENT_TOKEN_TO_BE_REPLACED