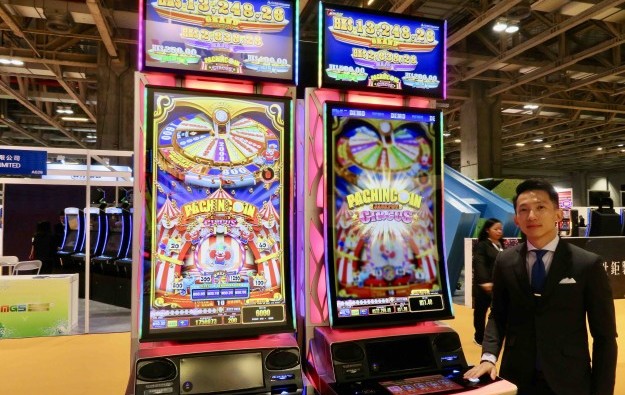 Aruze Gaming’s “Pachincoin”, a new casino slot game that combines the concept of Japan’s popular pastime pachinko with virtual elements of a traditional arcade-style coin pusher, has been showcased by the brand at the MGS Entertainment Show 2019, a casino industry trade show and conference held at the Venetian Macao casino resort.

Kevin Lee (pictured with the product), general manager at Aruze Gaming Macau Ltd, told GGRAsia that his firm hoped to introduce Pachincoin to the Macau market. The product was displayed at Global Gaming Expo (G2E) Las Vegas, another casino industry trade show held in October in the Nevada, United States gaming hub.  It is being installed in some venues in the U.S., Mr Lee noted.

It was the “most talked-about game in G2E Vegas,” Mr Lee told us. The first title of Pachincoin that was approved in the U.S. is called “Jackpot Circus”. That title would also be made available in the Philippines soon, he added.

Activation of the game’s ‘play’ button sees virtual coins cascade from the top of the screen. They bounce off virtual ‘pins’, in the style of an actual pachinko ball in a pachinko game. In Aruze’s product, prizes in the form of credits are awarded depending in what virtual ‘pocket’ coins fall. That can also trigger what is termed a multi-stage wheel bonus that either awards credit prizes, jackpots or releases into the game a stash of accumulated virtual coins.

Pachincoin is being presented on the brand’s Muso Curve-43 cabinet. Two more Pachincoin titles – “Money Lab” and “Mr Galaxy” – are due to be introduced next year, Mr Lee said. The game format of these two new titles will be similar to “Jackpot Circus”, but they will carry different themes and graphics.

The product is to be offered for relevant laboratory testing and will be presented to the Macau casino regulator, with the aim of getting it approved for the Macau market, Mr Lee said.

“Pachincoin is very unconventional because it doesn’t have reels,” the Aruze representative noted to us.

“…it is a slot machine, but the game concept is not a slot,” he added, “We’ll have to explain the game to them [regulators], and make sure they understand how the game works… I hope they will embrace innovation as we do and allow us to bring new games into the Macau market and elsewhere in Asia.”

Aruze Gaming also presented three new link games at MGS 2019: “Fu Cai Tong”, “Fantastic Dragon” and “Wheel of Prosperity”. Mr Lee said Aruze hoped they might be ready for introduction to the the Macau market by the time of G2E Asia 2020, a regional trade show due to take place next May in Macau.

So far this year, “Dragon Sic Bo” had continued to be the brand’s “strongest and core” product, Mr Lee remarked.

Operators and players appreciated “what is already proven” product-wise, noted the representative. Nonetheless the firm was happy in terms of its product pipeline to “push the boundary”, and bring “new stuff and new games into the market,” Mr Lee added. “If everyone does the same [kind of product], then it will lead to “very boring” casino floors, he stated.

The Aruze executive also noted that the group’s “Roll to Win Craps” electronic table game (ETG) had been launched in U.S. and the Philippines, and received positive feedback. There were hopes the product could be demonstrated in Macau next year.

“In the year 2020, we will continue to focus on the diversity of games, bringing games of different styles – from the very traditional Chinese games to… ones like Pachincoin… We will be also improving our ETGs’ features,” Mr Lee said, adding that he also hoped a new Aruze sic bo product would be available for viewing at the next edition of G2E Asia.