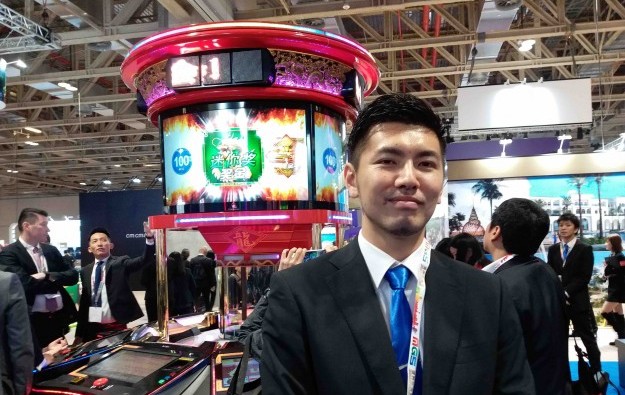 Aruze Gaming Macau Ltd says its casino game products are already closely in tune with the direction of the Macau gaming market, as the authorities there seek to move the local industry’s focus away from VIP play towards mass play and general tourism.

Joji Kokuryo (pictured), senior compliance and operations manager for the Macau unit of the Aruze Gaming group, says that the games the firm is exhibiting at the Macao Gaming Show 2016 – a regional casino industry trade show being held from November 15 to 17 at the Venetian Macao – include Dragon Sic Bo. It is an update of Aruze Gaming’s popular Lucky Sic Bo electronic table game product. Aruze Gaming is also showcasing linked progressive slot machines that it said appeal to casual visitors as well as casino fans.

“As a supplier in the Asian markets, Aruze definitely focuses on ETGs – electronic table games . Our biggest product for the Macao Gaming Show is the Dragon Sic Bo,” said Mr Kokuryo.

“It’s an updated version – with a dragon motif – of our Lucky Sic Bo product, which is maybe the highest ranking in performance of games in Asia, especially in Macau.”

Asked to explain the company’s definition of high performance, the executive stated: “We mean based on the numbers provided by the operators and by the impression the products make on the casino floor. You always see someone sitting at our machines. We get a lot of good feedback, and right now Lucky Sic Bo is our strongest product in the market.”

The original Lucky Sic Bo is well known for introducing a so-called ‘bash button’ to an electronic sic bo game. The button makes no difference to the outcome of each dice game, as that is determined by random number generation technology. But the button gives the player the feeling of control.

“This comes back to our chairman Mr [Kazuo] Okada. One of his ideas was to have an interaction between the player and the game,” said Mr Kokuryo.

He further stated: “The main popularity of ETGs is the minimum bet. You can play a traditional table game in Macau at a HKD100 (US$12.89) minimum bet, and you can play our ETGs at a HKD10 minimum bet. Also with ETGs it’s easier to understand how the game works. ETGs offer a help screen. Someone who’s never touched a table game before can sit down, read the rules, try out the game, and not worry about the possibility of being embarrassed at the table; and you can play for a lower bet than at a table game. It increases the possibility of attracting visitors and tourists to play your game: I think that’s the basis of our popularity.”

Aruze Gaming Macau is also highlighting at the Macao Gaming Show the group’s latest linked progressive slot products, which it hopes to release to the market in December.

“At this show we are exhibiting our newest series, which is called Happy Festival – a very Chinese, festive-oriented theme. It adds a little twist to the regular linked progressive, because every player has a chance to hit [a win]… not just the people making higher bets,” stated Mr Kokuryo.

The executive said that – besides Macau – the Philippines is also a “huge” market in Asia for Aruze Gaming as a group.

“That market has a had a long history with gaming machines – mostly video games and slot titles; but recently we are seeing a little bit more expansion in types of products people like in that market. It is also a very big, expanding industry, with the resorts at Entertainment City in Manila,” added Mr Kokuryo.

The new casino resorts in Manila include the US$2.4-billion Okada Manila, which is being developed by Aruze Gaming’s founder Mr Okada. The property is scheduled to open at the end of December.

“Obviously we are excited at the Okada Manila casino being built,” said Mr Kokuryo.

“Of course we have our products in every other casino in that area. But it will be more interesting to see how our products work in an environment where we can have an area highlighting a particular product,” he stated.

Some Macau casinos visited by GGRAsia on Thursday, actually had tables that were closed, notwithstanding strong consumer demand during Chinese New Year (CNY). The reasons for some tables being... END_OF_DOCUMENT_TOKEN_TO_BE_REPLACED