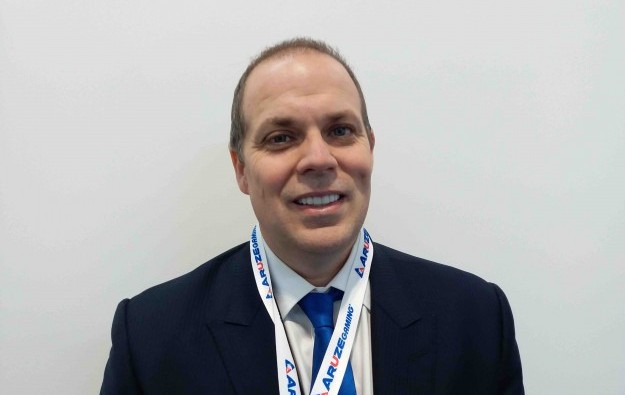 The Aruze Gaming brand has been a “dominant leader” in electronic table games in the Asian casino industry “since the beginning” of the regulated market opening up there, Eric Persson (pictured), president and chief operating officer at Aruze Gaming America Inc, told GGRAsia.

The executive also noted that the company’s business performance had not been negatively affected by legal battles between its parent company and the group’s founder, Japanese entrepreneur Kazuo Okada.

In an interview with GGRAsia, Mr Persson said that Aruze’s sic bo “is unquestionably the most popular sic bo product in Asia… and our roulette has done well for over a decade. What we are really focused on is refreshing those games”. He was speaking at the brand’s stand at the recent Global Gaming Expo (G2E) Asia 2018, held in Macau.

After recently updating its sic bo range with Dragon Sic Bo the firm also has a new version of its roulette electronic table game product that it showcased at the casino industry trade show.

“The biggest thing I think people will take from our show stand is… there’s a lot of confidence in our product,” stated Mr Persson.

“We are growing aggressively really all over the globe,” he added. “Our sales in Europe have doubled year-over-year. In North America we are up 80 percent for the last nine months, and are up over 50 percent in the last 12 months,” the executive noted.

“Asia is another region we are really starting to expand into: all the secondary markets like South Korea and Vietnam. We are doing well in the Philippines. We are going to work them all: Cambodia, Laos. For Aruze really our goal is to be in every jurisdiction where slot machines are sold,” said Mr Persson.

He explained to GGRAsia the thinking on that decision.

“At Sands we were the world’s largest slots buyer. It’s a frustrating thing for any purchaser when you go out and buy a US$20,000 slot machine and the supplier puts in software that doesn’t perform, and then they want you buy a new conversion [kit] for a game that doesn’t work,” he said, referring latterly to slot performance.

Despite Aruze’s Japanese heritage – via its founder Mr Okada, who initially made his money via pachinko, Japan’s highly popular arcade game – Mr Persson says Aruze and other Japan-linked casino equipment suppliers are still to be tested in the prospective Japanese casino market. He noted the Japanese firms were nonetheless likely to have a cultural advantage over Western rivals.

The executive told GGRAsia: “One of the things needed when coming into a new jurisdiction is to understand what elements are the locals engaging with; what do you want to take from that and incorporate into your larger slot machine device; how do you morph your slot machine product and the entertainment devices they like to play.”

He added: “So whether or not there are bash buttons or whether we incorporate a lot of the “pachi” elements – which obviously with Aruze’s background… is ingrained in us – I think that we have a head start… in understanding the Japanese market.”

Mr Persson further noted referring to the prospect of regulated casino gaming in Japan: “I think Aruze, Konami [Holdings Corp] and Sega Sammy [Creation Inc] as well, will be very successful in the Japanese market.”

GGRAsia asked Mr Persson whether patent litigation initiated against Aruze Gaming America by Universal Entertainment Corp – the conglomerate founded by Mr Okada but which ousted him as chairman last year – had been negatively affecting customer confidence in Aruze products.

He added, regarding Universal’s dispute with Mr Okada: “It’s really a shame, because they are really taking Mr Okada’s money, they are suing him personally, and saying all kinds of slanderous, libellous things about him – using his money to do it. In the end they are going to be exposed: is my prediction.”

GGRAsia also asked Mr Persson about the investigation into Mr Okada announced by the Nevada Gaming Control Board in relation to allegations by Universal Entertainment of fraud by Mr Okada – which the entrepreneur denies.

The executive added: “He’s had an active investigation for eight years, through the Wynn litigation, and during all that time he’s been found suitable.”

China has moved one step closer towards reopening, by relaxing some its Covid-19 control measures, with most infected people now able to quarantine at home rather than in state-sanctioned... END_OF_DOCUMENT_TOKEN_TO_BE_REPLACED