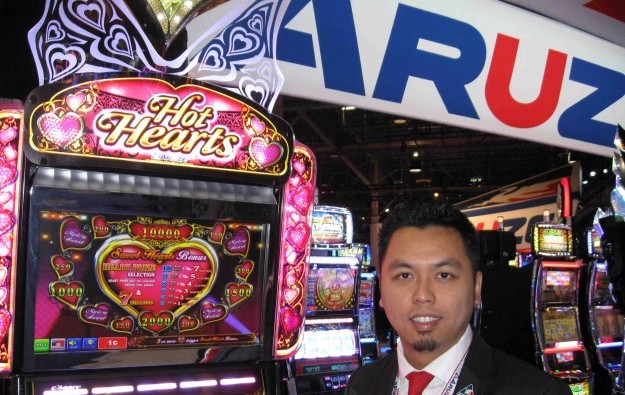 Aruze Gaming, one of the slot manufacturers that started the trend of bigger illuminated boxes – or ‘toppers’ – above its machines to make them stand out on casino floors, hopes to launch new game titles in its Innovator series of stepper games in Macau early next year.

The Innovator series is an updated version of traditional reel-spinning slot machines that have been popular in Las Vegas and beyond for decades. In this case the product line has oversize reels backed by coloured LED lighting as well as variable reel speeds.

The company is held by Japanese entrepreneur Kazuo Okada, who first made his fortune from pachinko machine manufacturing via his Universal Entertainment Corp business. Mr Okada is also developing a US$2 billion casino resort in the Philippines called Manila Bay Resorts which is projected to open in late 2015.

“The Innovator games are very popular in Macau,” he added.

“We hope to have these new games – that we are showing here – in Macau early next year.”

Mr Yu said the company’s focus was on creating game themes in-house rather than licensing themes from films and television in the manner of some of its competitors.

“We try not to get licensed product. We try to develop everything from our R&D [research and development] team. So you don’t see movie themes from us. A lot of [casino] operators appreciate that, because it’s authentic – it’s genuine.

“The R&D processes for slots and pachinko are separate, because they are separate businesses. But with the stepper [slot] product we can link a lot of things [to the pachinko components], including the [game] motor, the sound and the music. Pachinko and pachislot [another form of pachinko] has a lot of sounds and lights as part of the game,” explained Mr Yu.

The imminent return of package tours from mainland China will not only help boost Macau’s tourism businesses, but is also expected to help casinos gain more foot traffic in their mass gaming... END_OF_DOCUMENT_TOKEN_TO_BE_REPLACED