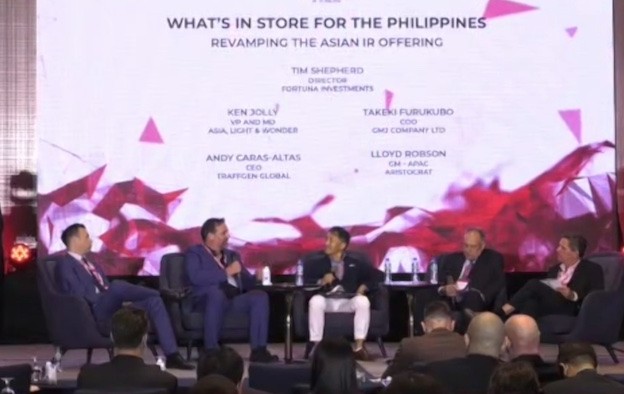 The more than two years of pandemic crisis have brought changes to consumer segments, including land-based casinos, such as increased use of cashless transactions, an industry conference panel (pictured) in Manila, in the Philippines, heard on Tuesday.

The executive stated: “When you look at a gaming floor today, it is still very old fashioned.” In terms of gaming machines, “there’s a big box… with a monitor on the front”.

But he added, referring to a 3D version of the Internet that has become a buzz word recently: “There will be some changes in the industry in the next 10 years, particularly as the metaverse gets understood.”

He noted: “I think you will start to see the gaming floors start to change,” and become “way more digital”.

Mr Jolly was speaking on the first day of the ASEAN Gaming Summit, organised by media outlet Asia Gaming Brief.

A fellow panellist, Lloyd Robson, general manager for the Asia Pacific region at casino technology supplier Aristocrat Leisure Ltd, told the audience – and referring to the Philippines – that as “players are getting back to the floors here… after a good two-and-a-half years out,” due to the pandemic, the “technology on offer to the customer” had advanced.

Referring to his firm’s slot machine product, he noted: “At a tactical level, when we think about the physical hardware going onto floors in terms of the cabinets and machines, there’s a lot more virtual technology now that we are building into the cabinets, which can elevate the experience, from what the player was used to.”

“A lot of the cabinets come now with a virtual [touchscreen] button deck,” added Mr Robson. “We now think of our button deck as a fourth screen” for the machine, to complement the several player screens on the cabinet, and often a top box with video animation.

Constraints familiar to the industry include the need to get regulatory approvals for innovative technology, and the wish of casino managements to hit return-on-investment targets, and not to risk alienating long-standing customers by trying to move things too quickly, observed the panel.

Aristocrat’s Mr Robson stated that technology suppliers were “ingredient brands to the properties”. He added: “We provide the products and services and solutions. Just purely from a gaming manufacturer’s perspective, it’s about just putting a few eggs in that innovation ‘bucket’, because a lot of the operators are fairly fixated on a certain return on investment.”

There was also a question of “how much space” the operators can give to “bringing new experiences” to players.

Light & Wonder’s Mr Jolly said one clear advance available for gaming floors – where permitted by regulators – was the ability of facial-recognition technology to identify players and their preferences even if they are not signed up for a casino membership scheme.

Though he noted that the challenge was to make sure such data – once gathered – was actively “mined” rather than just warehoused.

“Unfortunately what happens a lot of the time.. is that the data” is there, “but no one bothers to mine it,” he stated.

He added, referring to his group’s table game products: “With the stuff that we are doing now on tables… recognising chips” via electronic tags “and putting in cameras” and other technology at the tables, “we will be able to do full, accurate measurement of players at our tables,” not only at slot machines.

Macau casino operator MGM China Holdings Ltd had a “record” market share in January, and its venues were the “highest-earning businesses” in the portfolio of the majority owner MGM Resorts... END_OF_DOCUMENT_TOKEN_TO_BE_REPLACED