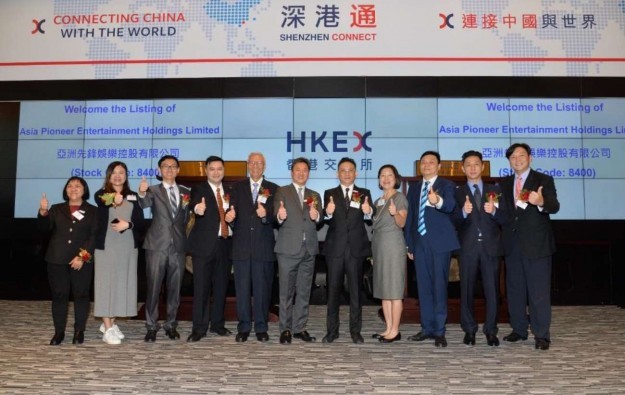 Asia Pioneer announced in late October plans to realise at least HKD50.2 million by offering 250 million shares on the Hong Kong Stock Exchange at an indicative price range of HKD0.24 to HKD0.36.

APE’s listing was fully subscribed, the firm’s managing director Herman Ng Man Ho told GGRAsia on Tuesday at the MGS Entertainment Show 2017 in Macau, on the eve of the listing.

“With the support of the capital market, our own capabilities in business development and the emerging market demand for electronic gaming equipment, we are confident in maintaining the company’s steady growth in the future and maximising returns for investors,” said Allen Huie, APE’s chairman, executive director and compliance officer, in a Wednesday press statement following the launch of the shares.

During the track record period reported in support of its listing application, APE was said to be the largest single supplier of electronic table games in the Macau market in 2016 measured “by revenue”, with a market share of approximately 30.4 percent.

Southwest Securities (HK) Capital Ltd was the sole sponsor of the offering.

Casino equipment supplier Sega Sammy Creation Inc said in a Friday release it was debuting its Genesis Crest 43J cabinet in Asia. The product will be available at an in-person trade show, G2E Asia:... END_OF_DOCUMENT_TOKEN_TO_BE_REPLACED