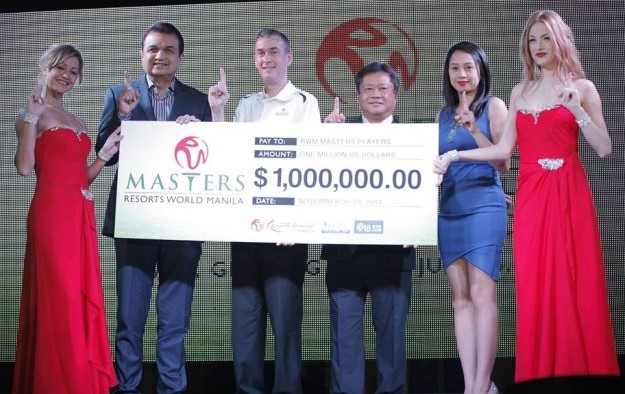 One example is the Resorts World Manila Masters, part of the Asian Tour golf tournament, which will offer a record prize fund of US$1 million in November, officials announced Wednesday. The event, in its second edition, will take place in November.

The Resorts World Manila Masters, which offered a prize fund of US$750,000 last year, will this year boast a new presenting sponsor in online casino firm 918.com. The tournament is part of a five-year agreement between the casino resort and the Asian Tour.

918.com is an online casino company licensed with First Cagayan Leisure and Resort Corp, the master licensor for Internet betting companies that wish to have a base in the Philippines to serve offshore customers. 918.com has its corporate headquarters in the city of Makati, in Metro Manila.

This is not the only leg of the 2014 Asian Tour being sponsored by a casino property. Macau-based casino resort Venetian Macao is the title sponsor for the third consecutive year of the Macau Open, slated for October. Solaire Resort and Casino, developed by Bloomberry Resorts Corp as the first of the new world-class resorts within Manila’s Entertainment City, is the main sponsor of the Solaire Open. The tournament had its second edition in March in the city of Calamba, in the Philippines.

The Asian Tour offers casinos in Asia an opportunity to promote their brands internationally. The tour is televised in over 200 countries and 650 million households, according to the organisers.

Last month, casino operator Sands China Ltd – which owns and manages the Venetian Macao – announced a sponsorship agreement with veteran golfer Ernie Els. The deal included the South African wearing the Venetian Macao logo on his right collar, back of hat and back yolk during the U.S. Open, a tournament he won in 1994 and 1997.

Mr Els, an Asian Tour honorary member and international ambassador, will now assist in marketing and promotion of the Macau Open. He will again take part in the tournament, after his debut last year.

Olaf Gueldner, senior vice president and chief marketing officer of Sands China, told GGRAsia last week that these kind of partnerships help to promote the brands involved. “It helps Venetian, obviously – again, we are business – but it also helps Macau because it increases the exposure of the Venetian Macau Open,” said Mr Gueldner.

On Tuesday it was announced that top professional players Miguel Angel Jiménez of Spain and Thailand’s Thongchai Jaidee will also compete at this year’s US$900,000 Venetian Macau Open.

It is likely that Macau will shortly have a third round of citywide centre-based Covid-19 testing in little more than a week, after the results so far of a second mass test – that was due to finish... END_OF_DOCUMENT_TOKEN_TO_BE_REPLACED