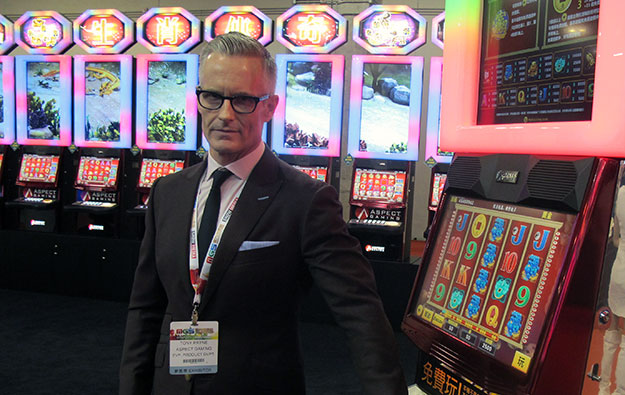 “We are going to be a lot more aggressive in the market,” he pointed out. “It is still going to be about Macau and Asia” – Cambodia and the Philippines are other Asian markets served by Aspect Gaming.

The company is entering a new development stage, Mr Payne explained. “We have grown a lot in terms of our product mix, we have matured a lot,” he added.

The executive expects Aspect Gaming to “become a force in Macau and certainly a much bigger player than we are now” over the next five years. “We are in it for the long haul,” he pointed out.

“We believe in Asia, obviously. We believe in the Macau market and think it is going to grow a lot – we want to be a part of that growth story.”

The firm had a strong presence at Macao Gaming Show 2014, with a large-size stand. The trade show, focused on the Asian gaming markets, took place last month at casino resort Venetian Macao.

Aspect Gaming will also look “a bit more” to California in the United States, where it already supplies some casinos, Mr Payne said. About 70 percent of gamblers in California are Asians, according to his estimates.

Mr Payne added: “We don’t go after the European market. We don’t feel that our players are there.”

Despite Aspect Gaming’s bullish prospects, Mr Payne admitted that the firm’s current product installation base is still limited. “We have grown some in terms of our footprint… Unfortunately, the market hasn’t grown like we had expected it to – you still have 13,000 machines in Macau, which is not appreciably different from what we saw six years ago, when we started the company.”

Founded in 2008 and with offices in Shanghai and Macau, Aspect Gaming supplies slot products to the land-based casino industry targeting Asian customers. It is also a supplier to the online, mobile and social casino gaming sector, where it has been growing rapidly via its Grand Orient Casino suite of social casino games.

Mr Payne acknowledged it was a challenge to set up Aspect Gaming. “We had to build an entire company, we had to build our technology, our manufacturing base, not to mention our team of engineers and developers based in Shanghai, and a whole team of artists,” he said.

Aspect Gaming was among the first slot makers to produce a game based on an Asian star. The firm in 2011 launched a game themed with famous Hong Kong movie and TV star Eric Tsang.

The competitive landscape has meanwhile evolved significantly. The number of slot makers supplying products to Asia continues to increase, and 2014 has been marked by several high-profile mergers and acquisitions in the casino supplier sector.

He added: “A lot of the big companies are experiencing as many problems as anybody else in trying to tap into the psyche of Asian players, specifically players in Macau. It is not enough to take those same games that have been successful in the West, re-skin them with an Asian theme or Asian title and expect them to work in the market. The players here are much more sophisticated.”

“It is always nice to think about winning huge jackpots, but they come at a price,” Mr Payne said. “That is what Aspect is about – we don’t want to be known as the ‘high-volatility company’ or the ‘low volatility company’. We want to offer a wide variety of experiences for players.”

He stated: “We feel that we are better prepared and more equipped to respond to costumer needs or changes in the market.”

Mr Payne pointed out Aspect Gaming expects this strategy to pay out in the long run. “As the market develops, you will have more players seeking a different kind of experience, seeking time on device, wanting more low volatility games, where they can sit down and play for a long time for a couple of hundred Hong Kong dollars,” he explained.

“I don’t think those players are really here right now,” he acknowledged. But added: “Aspect Gaming is laying the groundwork for when the player types broaden out.”

Hong Kong-listed Wynn Macau Ltd says it will inject nearly MOP4.80 billion (US$596.4 million) into Wynn Resorts (Macau) SA. That is in order to comply with Macau’s revised gaming law and the... END_OF_DOCUMENT_TOKEN_TO_BE_REPLACED