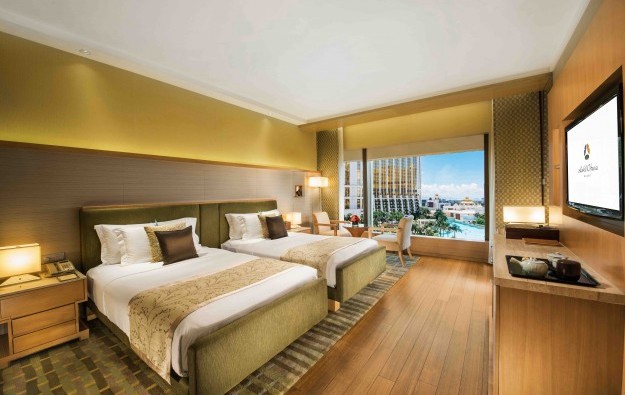 As of last week, “around 30 percent to 40 percent” of Macau hotel rooms were booked for China’s autumn Golden Week holiday, confirmed the Macao Government Tourism Office (MGTO), in response to a request from GGRAsia. The booking information was garnered from hotel-sector associations, said the tourism bureau.

China’s autumn holiday break this year runs from Thursday (October 1) until October 8 inclusive. Prior to the Covid-19 pandemic, a high level of Macau hotel occupancy was often seen as a positive indicator for levels of gambling in the territory.

“Everyone’s expectation is to do a percentage of the past year’s [casino revenue]. No one is expecting to have an immediate rebound” after Covid-19, said Linda Chen, vice chairman and chief operating officer of local casino operator Wynn Macau Ltd, as quoted on Wednesday by business news outlet Bloomberg.

“We need to do it step by step. To have a successful, issue-free Golden Week period will turn around the whole perception of travel to Macau,” added Ms Chen, alluding to consumer concerns about travel in general, during the pandemic.

Wynn Macau Ltd controls just over 2,700 rooms in the Macau market, across its Wynn Macau property on the city’s peninsula, and Wynn Palace on Cotai.

As of August 31, Macau had 35,000 available hotel rooms in the market, a decline of 9.7 percent year-on-year, according to data from the city’s Statistics and Census Bureau.

Some of the change is due to ongoing refurbishment at Sands Cotai Central, a property of Sands China Ltd, which is being converted into a themed resort called the Londoner Macao.

A total of 117 Macau hotels and guest houses was open for business in August, a decrease of two, measured year-on-year.

The 2020 autumn Golden Week has been seen by a number of investment analysts as a key moment for gauging the likely strength of any comeback this year in casino gross gaming revenue (GGR) for the Macau market, after the initial disruption wrought by Covid-19.

Since September 23, applications have been reopened across mainland China for Individual Visit Scheme (IVS) visas for trips to Macau, although analysts have suggested that for now, it is typically taking seven working days to process them. There is little prospect of Hong Kong visitors arriving in any numbers during Golden Week, as a 14-day quarantine is still required for anyone arriving via the neighbouring city.

In August, the average occupancy rate for Macau’s stock of hotel guest rooms stood at 13.3 percent, a decline of 79.7 percentage points year-on-year, said on Tuesday the statistics bureau.

The tally of local guests also represented a month-to-month increase of 52.4 percent, “as hotels continued to offer promotional packages to residents,” said the statistics bureau.

On Tuesday, the Macao Government Tourism Office had announced details of its preparations for autumn Golden Week. It mentioned Covid-19 countermeasures – pursued on an interdepartmental basis with the likes of the city’s Health Bureau – and aimed respectively at tourism industry staff and consumers.

The steps included – if deemed necessary – efforts to spread the volume of incoming mainland tourists across the city’s various land-based checkpoints, to avoid crowding.

There was also a reminder of the need for hotels to maintain accurate records of guest information at the time of check-in.