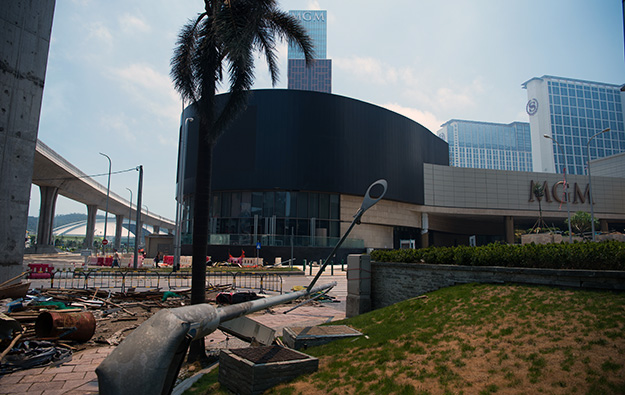 Several brokerages suggest that following Typhoon Hato – which struck Macau on Wednesday – year-on-year growth in August gross gaming revenue (GGR) is likely to be affected by between several hundred basis points (bps) and up to 600 basis points, although they stressed the number could go higher depending on the length of disruption.

Brokerage Union Gaming Securities Asia Ltd told GGRAsia on Monday: “We think at least 600 basis points of growth to Macau GGR will have been lost due to the typhoon disruption, but we have been encouraged by what we are hearing from industry contacts regarding business volumes on Cotai, which are normalising, although the peninsula might take a little longer. We expect the market to be back to normal by the end of this week.”

Macao Government Tourism Office (MGTO) reiterated in a Sunday statement that it had requested local travel agencies to suspend their arrangements for tour groups to Macao in the period August 25 until August 30, “so that more resources can be allocated for the restoration work after the catastrophe”. The tourism bureau has also urged tourists to reconsider their trips to Macau.

In a press release uploaded on Monday morning to the MGTO’s English-language website, the tourism bureau said that – as of 3pm on Sunday – 61 of the 64 local hotels in the three-star to five-star category that it had canvassed, confirmed having power and water.

It was the second time in five days that flights and ferry sailings to and from Macau were suspended for a period of time.

Wednesday’s event had been the worst storm recorded in Macau for 53 years, said the city’s government, with wind speeds of more than 200 kilometres per hour (124 mph), wide scale flooding and structural damage to buildings and trees and led to the deaths of 10 people.

Macau’s six casino operators – that all face potentially having to rebid for casino rights when their current concessions expire on various dates between 2020 and 2022 – were all keen to show their public-spiritedness in the wake of the disaster and their commitment to the clean up process.

On Friday, Macau casino operator Melco Resorts and Entertainment Ltd said it had reassigned all 2,000 workers on its under-construction Morpheus hotel tower at City of Dreams to join Macau government-led recovery efforts across the territory. It added they would work through the weekend across the areas of the city worst affected by Typhoon Hato.

Also on Friday, MGM China Holdings Ltd – its parent MGM Resorts International and a major shareholder, Pansy Ho Chiu King – announced they were contributing MOP30 million to “rebuild the Macau community” in the wake of the disaster.

On Sunday, Lui Che Woo, chairman of Galaxy Entertainment Group Ltd, said in an open letter to the community and company employees that an aggregate of MOP60 million was being committed from the company’s foundation and his family “to support the relief efforts of the people of Macau as well as our Galaxy Entertainment Group team members during this challenging and stressful period”.

There had earlier been some complaints on social media that the company’s initial appeal for clean up volunteers among its workforce had focused on the pool deck of its Galaxy Macau casino resort on Cotai, rather than the general task of community clear up. While the company has not issued a public comment on the situation, several people have used social media channels to criticise the gaming operator.

Sands China Ltd said more than 100 volunteers from its Sands China Care Ambassador programme helped clean up debris in the streets Saturday and also visited public housing at Fai Chi Kei to distribute bottled water, meal boxes and cleaning kits to families in need. The company also said it distributed 10,000 bottles of water to team members whose families were in need of clean drinking water due to disruption of mains water supply after the storm.