Authorities charge leaders of Forefront of the Macao Gaming 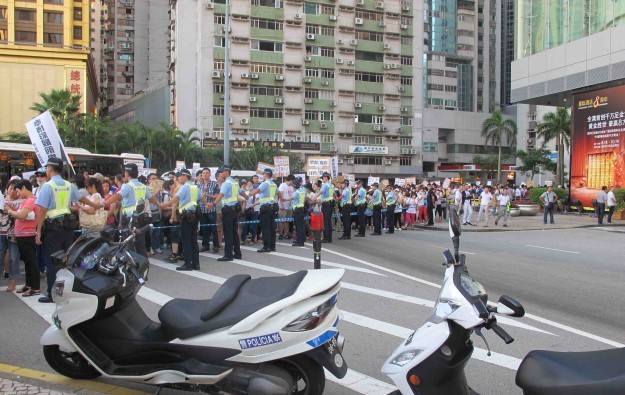 Macau authorities have accused five members of labour activist group Forefront of the Macao Gaming of aggravated disobedience following a protest on August 25.

The five include president Ieong Man Teng, co-founder and secretary general Cloee Chao, vice-president Lei Kuok Keong and two other members of the labour association. They denied the accusations at a press conference on Monday.

Casino employees backed by the Forefront of the Macao Gaming have staged several protests this year, demanding pay raises and improvements in working and promotion policies.

According to the group, the police accused its members of breaching a police cordon during the August 25 demonstration by dealers and other frontline workers.

The demonstration didn’t pass MGM Macau casino resort as police denied the association’s request due to traffic conditions. Some protesters however tried to march to the property owned by MGM China Holdings Ltd, although eventually all of them went back to the original route after being persuaded by the police, Mr Lei told reporters on Monday.

The vice-president of the labour group said its members now feel intimidated by the police. He also criticised authorities for contacting their families when collecting information.

Mr Lei admitted that some members may quit the association and that many others may not take part in new protests.

Meanwhile, another labour association has requested the Macau government to review the approval procedure for casino operators to hire migrant unskilled workers.

The Macau Gaming Enterprises Staff Association – affiliated with the influential Macau Federation of Trade Unions – had a meeting with the Human Resources Office on Monday. The association said that if casino operators do not provide reasonable salary increases for unskilled local workers, the government should reduce their quota for imported labourers.

The long-awaited new outdoor theme park at Resorts World Genting, Malaysia’s only casino resort, is impressive, but likely to be “loss-generating due to heavy depreciation”, says a Thursday... END_OF_DOCUMENT_TOKEN_TO_BE_REPLACED