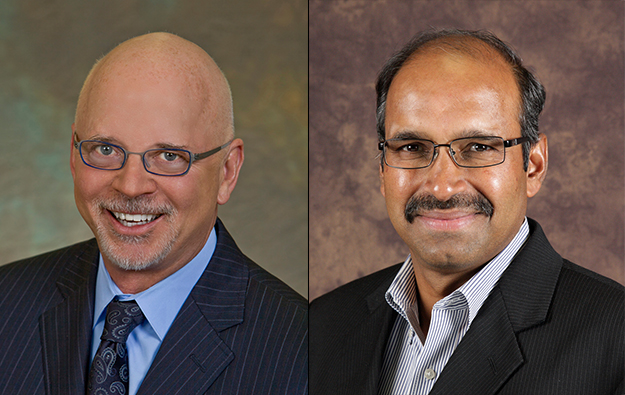 Ramesh Srinivasan (pictured, right) will no longer serve as president and chief executive of Bally Technologies, the company said in a statement.

Bally Technologies did not provide a reason for the sudden departure of Mr Srinivasan.

Board member David Robbins has been appointed chairman effective May 23. Mr Robbins also served as Bally Technologies’ chairman from 1997 to 2010.

“We are confident that Dick, together with our executive management team, will ensure a seamless transition and execute our strategy of continuing to grow Bally into the leading provider of technology based products and services to the global gaming industry,” Mr Robbins said in a written statement.

“I believe that the opportunities we have ahead of us in the coming months are truly exceptional,” Mr Haddrill said, also in a prepared statement. “I am very excited to return to the leadership of Bally and to begin focusing on our many worldwide growth strategies.”

Bally’s statement quotes Mr Srinivasan as saying: “I am confident that that the company is extremely well positioned to build on some fantastic opportunities.”

Bally is one the world’s largest gaming equipment suppliers. The company purchased last year casino equipment company SHFL Entertainment Inc, in a deal worth about US$1.38 billion.

Mr Srinivasan’s surprise departure comes after Bally Technologies announced earlier this month record revenue of US$338 million for the first quarter of 2014. This was the first full quarter after Bally Tecnhologies acquired SHFL.

“Reopening” of China relative to its current “Covid-zero” policy could start “in spring 2023” based on “three signposts” that could emerge after the 20th National Congress of the... END_OF_DOCUMENT_TOKEN_TO_BE_REPLACED