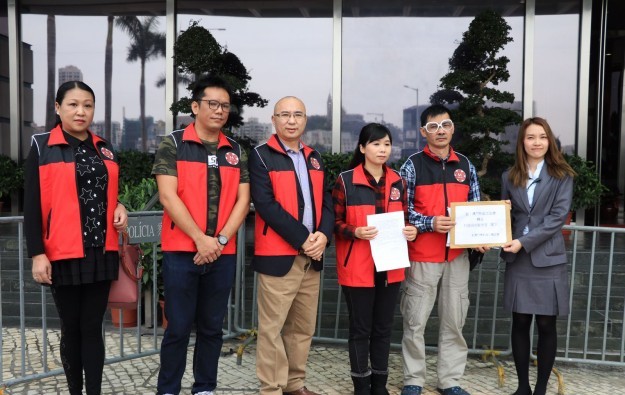 A Macau gaming labour activist group has called for blacklisting of casino customers repeatedly caught smoking in areas where tobacco use is forbidden.

The group’s leader, Cloee Chao (pictured, third right), delivered to the city’s Legislative Assembly on Tuesday afternoon such a request in a letter addressed to Macau’s Chief Executive, Fernando Chui Sai On.

Ms Chao’s group – Professional for Gaming of New Macau – says that anyone recorded by the Tobacco Prevention and Control Office as having committed a smoking rule offence twice, “should not be allowed to enter casinos”. Were such a rule introduced, it should apply retrospectively in the following sense: anyone already on record has having been caught twice would be barred for any third offence.

“What we are worried about is that even when the [revised smoking control] law comes into effect in 2019, the gamblers will not be willing to leave their tables to smoke in the smoking lounges…” Ms Chao told us. “For these gamblers, especially the VIP players, the existing fine is a small amount for them and not a deterrent at all,” she added

“In some VIP gaming rooms, they have already banned customers from smoking tableside, but this has not worked out very well. We are also doubtful about the enforcement effort concerning [casino smoking ban] violations,” Ms Chao added.

She also noted that her group would schedule meetings to discuss the issue of strengthening smoking control inside casinos with the city’s casino regulator Gaming Inspection and Coordination Bureau, and Tobacco Prevention and Control Office.

Choi Kam Fu, the director general of a labour group called Macau Gaming Enterprise Staff’s Association, accompanied those on the march. Mr Choi told GGRAsia at the time that those marching were mainly frustrated by what they claimed was Wynn Macau Ltd’s inaction on the issue of smoking control even after a signature collection that took place in March.

China has moved one step closer towards reopening, by relaxing some its Covid-19 control measures, with most infected people now able to quarantine at home rather than in state-sanctioned... END_OF_DOCUMENT_TOKEN_TO_BE_REPLACED