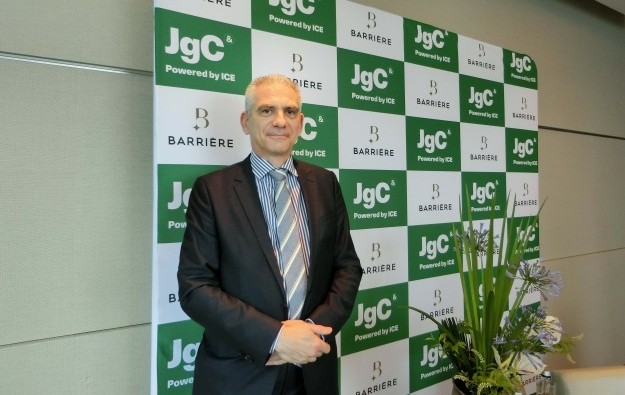 French gaming and hospitality brand Groupe Lucien Barrière would be “comfortable” with a minority equity position in a Japan casino resort, provided the firm were able to have a role in gaming operations.

So said Jonathan Strock (pictured) president of Lucien Barrière Japan, in an interview with GGRAsia on the sidelines of the recent Japan Gaming Congress held in Tokyo.

A week earlier the group had declared its interest in Wakayama prefecture as a site for such a scheme, opening an office there. The project, which might have a capital cost starting at around US$2.5 billion, would be a “naturally-Japanese resort” in terms of its cultural fit – as mentioned by Mr Strock in his presentation – while also appealing to mass-market gamblers from overseas, he told us on the sidelines of the conference.

The group already operates casinos in France, Switzerland and Egypt.

Wakayama – as a smaller Japanese conurbation – was a “realistic” choice, Mr Strock remarked to us. “If we’re looking at the metropolitan areas, we’re coming face-to-face with Las Vegas Sands [Corp], MGM [Resorts International], Melco [Resorts and Entertainment Ltd] – the very large investments – perhaps we don’t have so much of a chance,” he said.

“The investment [in regional destinations] is more suited to a company of our size. We’re more comfortable with those rather than getting into a big fight with the American companies,” Mr Strock added.

Barrière is anticipating it will take part in a request-for-concept (RFC) process in Wakayama prefecture, likely to be launched “towards the end of this year”, the firm’s executive noted to us.

In terms of capital budget for a Wakayama resort, “US$2.5 billion seems a good place to start,” Mr Strock told us.

Barrière had been attracted to Wakayama by several factors, identified after studying the destination for the past five years, said the executive: the beauty of the surrounding countryside, the cultural sites in the prefecture, and the “easy access” to Kansai International Airport.

The earliest a Wakayama casino resort – known in the Japan context as an integrated resort or “IR” – could open would be approximately three years after the destination is confirmed as a location, estimated Mr Strock.

Japan is to allow a maximum of three IRs in the first phase of market liberalisation. Local authorities must first find commercial partners, then apply to the national government for consideration for one of the three permits. The central authorities have not yet published the so-called “basic policy” on IRs, including the criteria for deciding where they can be.

Barrière is hopeful Wakayama’s RFC process “might be started towards the end of this year, and… replies will have to be by…end of April, May of next year,” stated Mr Strock.

“It will take probably six months for the prefecture to decide on the [partnering] operator, and then it will probably take another year for Tokyo to decide among the different [cities' and prefectures’] offers,” the executive suggested. “Construction can take around three years,” he noted.

“The site [in Wakayama] itself is ready to go. There is no need to have any preparation,” Mr Strock added, referring to Marina City, a 40-hectare (98.8-acre) artificial island within the boundaries of Wakayama prefecture earmarked for the local authority’s plan to host an integrated resort.

Mr Strock said that while his firm would be willing to accept a minority ownership position in the targeted IR project for Wakayama if need be, it would aspire to be the operator of the resort’s facilities.

“We’re comfortable with the minority [position] because I think in a Japanese resort, the economic benefits should stay mainly in Japan, which will imply most of the equity shareholding should belong to Japanese companies or Japanese individuals,” Mr Strock remarked to us.

“But inside a consortium, we would like to be the operator of the [IR] facilities… We not only want to have financial partners, we also want to have partners that can actually bring something else: they can assist with MICE, assist with conference facilities, assist with leisure facilities, real estate, construction,” stated Mr Strock, referring initially to meetings, incentives, conferences and exhibitions business. That is a key component of the Japanese government’s requirements for the country’s IRs.

“These are the parts that the group would like to have Japanese partners to have an active role in,” the French group’s executive added.

Barrière envisions a Wakayama casino resort that blends Japanese cultural elements with the French firm’s expertise in gambling and hospitality business. Aside from its casinos, the brand runs luxury hotels in France and Morocco, as well as golf courses and restaurants.

“You’ll have the essentially Japanese elements but with Barrière having a bit of oversight on the choice of materials [for the build of the casino resort]…where Barrière will be bringing is perhaps its own dining aspects and certain gambling aspects,” Mr Strock told us of his firm’s goal for a Wakayama IR.

The gaming venue inside the IR would be focused on the mass market, Mr Strock said.

“I think it’s pretty much mass market for most of it,” the French firm’s executive stated. “There’ll be boutique elements inside it… but it doesn’t have to be one for the extremely rich to come in. It’s a casino for everyone,” Mr Strock remarked to us.

The Barrière executive said the fact the firm did not currently have operations in Asia should not be a disadvantage when competing for an IR licence Japan. “Because we will be having Japanese partners; they will be bringing in the knowledge of the local market that we don’t have. A lot of the skills they already have in Japan: what they don’t have is the gambling aspect,” said Mr Strock, noting firm’s experience in operating luxury hotels was one of its key competitive strengths.