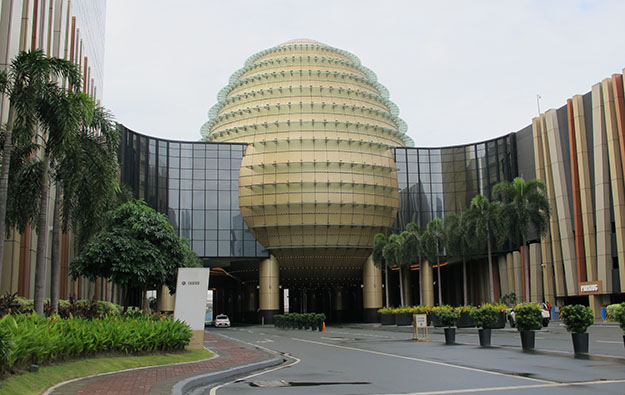 Belle Corp’s share of gaming revenues from the City of Dreams Manila casino resort (pictured) fell 38.6 percent year-on-year in the first quarter, which the company said was “primarily from Covid-19 -related developments”. The complex is run by a unit of gaming operator Melco Resorts and Entertainment Ltd.

Such gaming revenue share was just under PHP445.04 million (US$8.8 million) for the three months to March 31, compared to nearly PHP724.72 million in the prior-year quarter, Belle Corp said in a financial report filed on Friday to the Philippine Stock Exchange.

Belle Corp, which is also involved in lottery scratch card ticket sales, saw quarterly revenue in that segment dip 32.9 percent year-on-year to PHP134 million. Its real estate sales revenue fell 60.5 percent year-on-year, to just under PHP50.5 million. The group noted the real estate segment’s decline coincided with an eruption in January of the Taal volcano on the country’s main island Luzon, near a location where it has a real estate project.

Belle Corp’s total quarterly group revenues were down 24.9 percent, at PHP1.42 billion, from PHP1.89 billion in the first quarter of 2019.

Covid-19 had hurt Belle Corp’s “primary growth driver, its share in the gaming revenues at City of Dreams Manila,” the firm noted in its filing.

“The effects of the pandemic began with declining tourist arrivals prior to the implementation of the enhanced community quarantines nationwide, and was compounded by the temporary suspension of gaming operations at City of Dreams Manila on March 16, 2020 in compliance with government initiatives to contain the virus,” stated the company.

As of 4pm on Wednesday, the Philippines had recorded 15,049 cases of Covid-19, including 904 deaths, according to a Thursday briefing by the country’s Department of Health.

This week a senior executive at City of Dreams Manila told GGRAsia the venue was preparing for reduced-capacity gaming operations once Manila’s Covid-19 measures were eased sufficiently to enable casinos to reopen. No date for the reopening of casino complexes in Manila has been announced thus far.

Belle Corp noted in its quarterly report: “City of Dreams Manila is using this time to prioritise the health of its employees, to establish protocols that ensure a safe working and recreational environment and to support the government in keeping people safe and restarting the economy.”

Belle Corp says its principal asset is City of Dreams Manila in the Entertainment City casino cluster near Manila Bay. The venue is being leased on a long-term basis to the Melco Resorts group.

In addition to lease income from that venue, Belle Corp says it is accorded a share in revenues or earnings from City of Dreams Manila’s gaming operations through an operating agreement between its 78.7-percent -owned subsidiary Premium Leisure Corp and the Melco Resorts group. Belle also owns approximately one hectare (2.5 acres) of undeveloped land near the City of Dreams Manila site.