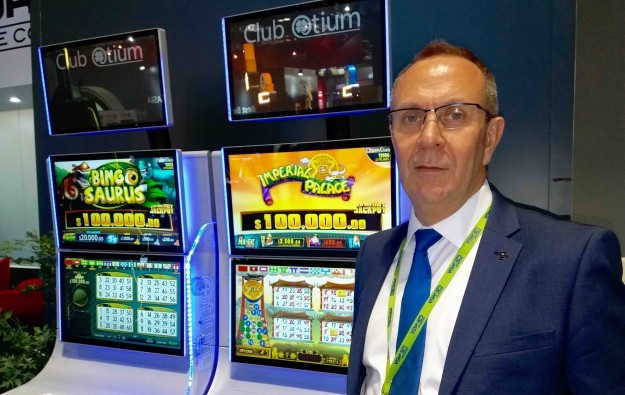 Austrian gaming equipment maker Novomatic AG says its video bingo electronic game products under the “Otium” brand have proven a surprise hit in Asia Pacific and have also opened doors for Novomatic in the casino sector there.

“Our Otium bingo products are opening a lot of doors for us in this region [Asia Pacific]. We hadn’t realised it would prove so interesting [for gaming operators],” said Lawrence Levy (pictured), Novomatic’s vice president for global sales, in an interview with GGRAsia during this year’s edition of Global Gaming Expo (G2E) Asia, a casino trade show and conference held in Macau recently.

Otium games had been initially developed for use in the so-called “Class II” machine sector, i.e., outside the commercial casino sector – the latter often referred to by industry professionals as “Class III”. The categorisations are often used in the United States to indicate the difference between video lottery terminals run from a centralised computer – typically in North American tribal gaming casinos – and casino video slot machines in commercial-sector casinos, where each machine has a random number generator on board.

“The Otium is a pure bingo game, so it can work in a Class II market, but we also want to certify it for Class III as well, because there’s a lot of interest in it,” stated Mr Levy, referring to Asia Pacific markets.

“There are some very good games on there [the platform], and it’s very customer-friendly, easy to understand, with nice bonus games,” he added.

The executive stated: “Right now the Philippines looks to be a very interesting market: just in its size and the way it’s developing and how fast it’s developing; with integrated resorts, with bingo, with slot arcades.”

The firm says it has recently had its “Globe Roulette pro” single-player roulette game approved in Macau.

Referring to Asia Pacific as a whole, Mr Levy noted: “This is a market where we see a massive development opportunity for our company. We know that we are very strong in Europe, and we have been for some years… [In Asia Pacific] it’s a case of us targeting the right kind of products that are going to suit the players in these markets. And there are varied markets in the Asian region.”

Ainsworth Game had said in a June 2016 filing that its shareholders had approved the sale of a majority stake in the business to Novomatic. Integration is due to be completed by October this year, according to comments by Ainsworth Game’s chief executive, Danny Gladstone, in a recent interview with GGRAsia.

Novomatic’s Mr Levy said: “I think we can do things hand in hand. There are a lot of synergies between the two, which is why we are going through this acquisition process. I think we can learn from each other in the different markets and different areas of the world. Where we’re strong they haven’t been so strong, and vice versa, so it’s definitely a process for the next couple of years. I think eventually we’ll get through to some content sharing.”

Mr Levy said Novomatic was currently working on some slot products for the Asia-Pacific region.

“We think that by the end of this year we will have specifically-tailored games for these kinds of markets – for the ‘time on device’ kind of player,” stated the executive.

Philippine gaming investor Leisure and Resorts World Corp reported a net loss of nearly PHP222.4 million (US$4.2 million) in the first three months of 2022, up from PHP125.6 million a year earlier.... END_OF_DOCUMENT_TOKEN_TO_BE_REPLACED