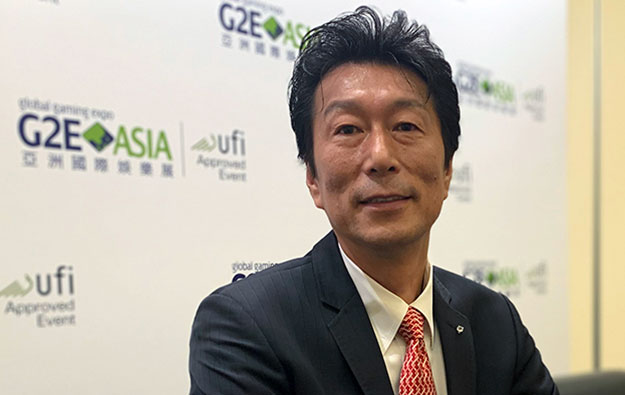 Philippine casino firm Bloomberry Resorts Corp will not take part in Osaka’s request-for-concept (RFC) process for a casino resort in that Japanese prefecture and city. Mitsuaki Kiriyama (pictured), vice president of Bloomberry Resorts Japan Inc, a subsidiary of the Philippine group, mentioned as a reason the intense competition among casino firm suitors.

Mr Mitsuaki told GGRAsia in an interview that Bloomberry Resorts was interested either in vying for a so-called regional casino project in Japan; or a permit in one of the other major Japanese conurbations such as Tokyo or Yokohama.

The governments of Osaka prefecture and the Osaka city jointly launched last month an RFC application phase in its effort to identify possible commercial partners for hosting an integrated resort. Interested parties should signal their interest by Friday.

“We are not interested in Osaka,” Bloomberry Resorts Japan’s Mr Mitsuaki told GGRAsia. He mentioned the intense competition for a licence there – namely between large U.S.-based casino operators – as one reason for the company’s decision.

Banking group Morgan Stanley said in a Sunday note that “given the competition and inflation, we are worried development prices [for an integrated resort in Japan] are getting bid up”, potentially leading to “diminishing returns”.

Japan’s Prime Minister Shinzo Abe has endorsed the legalisation of such resorts as a stimulus for inbound tourism. Three venues will be allowed in the first phase of liberalisation. Those local governments qualified to apply to the national government for permission to host an IR – namely prefectures and ordinance-level cities – need to team with private-sector partners prior making their bid to the national government.

Several international gaming firms have expressed interest in getting a casino licence in Osaka. United States-based MGM Resorts International confirmed last week that it was going to submit a proposal for the Osaka casino RFC phase, in partnership with Japanese financial services group Orix Corp.

U.S.-based casino firm Las Vegas Sands Corp, which already has Asian operations in Macau and Singapore, has also publicly affirmed its interest in Osaka for its Japan casino resort bid, as has Asian casino developer Melco Resorts and Entertainment Ltd.

Location not yet decided

Bloomberry Resorts Japan’s Mr Mitsuaki told GGRAsia: “We have not yet decided which location is best. That is still under research.”

The executive said Bloomberry Resorts planned to make a decision on the matter later this year, after the formal announcement by the Japanese government of its national public policy for selecting the respective location of its first casino resorts. According to Mr Mitsuaki, such government announcement was likely to happen in September or October.

In broad terms, Bloomberry Resorts expected an integrated resort in Japan – excluding Osaka – to take between three and five years to complete, and come with a price tag of US$2 billion to US$3 billion. Mr Mitsuaki stressed it was hard presently to make a definitive estimate of capital investment, since several details regarding the overall casino framework in Japan – including taxation and junket regulation – were still being finalised. These could have a significant impact on projected return-on-investment rates, and therefore lead to changes in budget, he stated.

The Osaka authorities’ IR plan reportedly calls for a JPY930-billion (circa US$8.5-billion) investment, somewhat short of the estimated US$10-billion figure mentioned by several large U.S.-based casino operators as the likely required investment in that city.

Any bid by Bloomberry Resorts for a casino licence in Japan would in all likelihood involve local partners, Mr Mitsuaki stated. “We already have talked with many regional Japanese governments and Japanese companies,” he said.

The executive added that his firm was open to partnership in a variety of forms, including being a minority shareholder in a potential casino project in Japan. He also highlighted the customer intelligence a Japanese partner could bring to the venture.

The executive was talking to GGRAsia on Tuesday on the sidelines of the Global Gaming Expo (G2E) 2019, a three-day casino industry trade show and conference in Macau ending on Thursday. He was one of the speakers in a conference panel discussing the outlook for Japan’s nascent casino industry.

Bloomberry Resorts has subsidiaries that respectively own and operate Solaire Resort and Casino in Manila, the Philippine capital; and the Jeju Sun Hotel and Casino on the South Korean holiday island of Jeju. The group has plans to develop a new casino resort at Quezon City on the outskirts of Manila.

Bloomberry Resorts’ Japanese subsidiary was established around five years ago, according to Mr Mitsuaki. The unit, based in Japan’s capital Tokyo, has since been conducting feasibility studies for the development of a casino resort in a number of Japanese cities, he said.

A number of industry commentators expect at least one of Japan’s initial three casino licences to be awarded to a major metropolitan area such as Osaka, Tokyo or Yokohama. Some investment analysts however also expect at least one regional site to be selected in the initial round of casino development, in order to stimulate economic growth outside the country’s main economic hubs, as envisioned by Prime Minister Abe.

Mr Mitsuaki said one of the competitive advantages of Bloomberry Resorts in vying for a casino licence in Japan was its Philippine pedigree in terms of quality of its hospitality services. That, he added, was supported by sound operational and technical expertise, meeting international industry best practices.

Bloomberry Resorts Corp – the operator of Solaire Resort and Casino (pictured) in the Philippine capital Manila – on Wednesday announced in a series of filings, that an aggregate of just over 7.9... END_OF_DOCUMENT_TOKEN_TO_BE_REPLACED