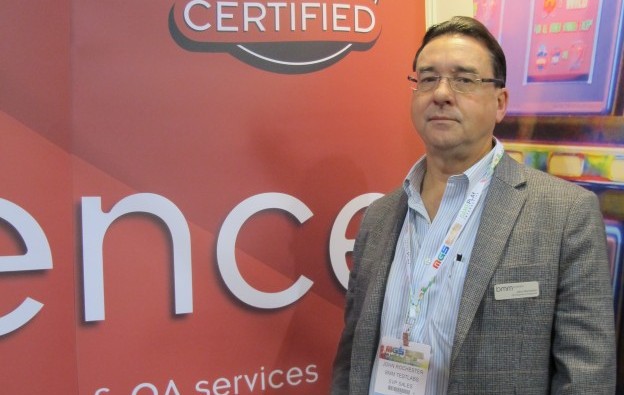 “We haven’t set the 2016 budget yet but there will definitely be a larger component on iGaming,” said John Rochester (pictured), BMM’s senior vice president for sales, Australia and Asia Pacific.

“We will see the growth in iGaming around Asia and other markets. I think that’s where we will be building additional skills and competences,” Mr Rochester told GGRAsia.

BMM is already well-skilled in testing land-based gaming products, and has “a good level of skills on iGaming,” the executive said. “But as the market and opportunities grow, then obviously we will need to grow the skills and competences in our labs around the world, and particularly in Asia,” he added.

Mr Rochester additionally said the company would “probably be looking [at taking] more gaming expertise into the Macau lab in 2016”. But he also noted, “the beauty with testing in iGaming is that you can do that in any location”.

Mr Rochester spoke to GGRAsia during this year’s edition of the Macao Gaming Show, which took place at the Venetian Macao.

The BMM executive noted there were “a lot more Asian-themed content” at the Macao Gaming Show stands, as well as “a lot of iGaming”.

The trade show presented “a very good opportunity for the Asian manufacturers or the Asian developers to get into the gaming industry,” he said.

Asia has been one of BMM’s growth areas in 2015, Mr Rochester said. In August, BMM said its first half 2015 revenues grew by 7 percent. The firm’s earnings before interest, taxation, depreciation and amortisation (EBITDA) grew by 51 percent year-on-year “on a constant currency basis,” it said.

As further Asian markets become regulated, gaming manufacturers and developers are increasingly becoming interested in getting their products and systems certified and approved in those markets. This is “bringing a new flavour of game, style, graphics and sound,” to gaming products in the region, said Mr Rochester. He said he believed there was also an opportunity for small manufacturers to tap into Asian markets.

“It’s great, because more innovation creates more changes [in technology] and we test the changes, so that creates growth for us,” he added.

BMM is also keeping a close watch on developments in currently unregulated markets in Asia such as Japan, as they could bring new opportunities in compliance testing.

BMM has been expanding in the European and the U.S. markets in 2015. It recently opened a large centre for quality assurance (QA) testing in Canada. Mr Rochester said that the skills and experience the company has in compliance testing had crossover benefits for QA testing.

“I think that announcement over there [in Canada] will open up a new avenue that in 2016 we will bring into other parts of the world,” Mr Rochester said.

An article in Macau’s draft new gaming law, to create a mechanism to dissolve an existing gaming concession in the event it was not granted a new licence after the current six concessions... END_OF_DOCUMENT_TOKEN_TO_BE_REPLACED