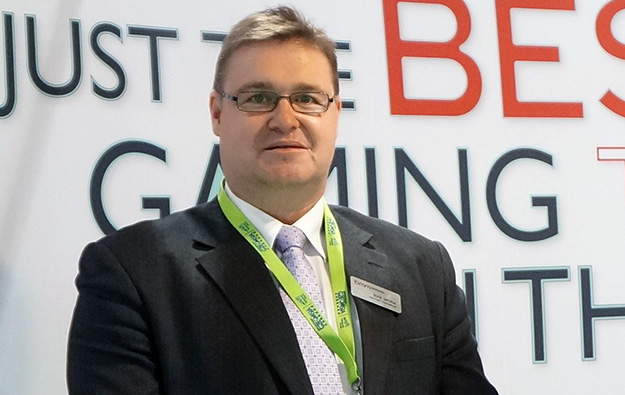 BMM International LLC, known as BMM Testlabs, is on the lookout for extra staff to keep up with growing demand for its services in Asia, says Kirk White, executive vice president and general manager, international, for the gaming testing laboratory and technical consultancy.

“We’re actually in the middle of recruiting now, we’re looking to bring four to six new people as soon as we can, because our services are wanted a lot more,” Mr White (pictured) told GGRAsia.

He was speaking on the sidelines of Global Gaming Expo (G2E) Asia, a three-day casino industry trade exhibition and conference taking place in Macau until Thursday.

Mr White said the main recruitment target would be Macau residents, namely graduates from the Macao Polytechnic Institute, which has a partnership with BMM Testlabs.

“We provide training services and presentations, both practical and theoretical, to their students, while looking to recruit from among those who have finished their technical courses. It works well,” said the BMM executive.

Nonetheless, “we’re in quite a technical area of the industry, which means we invest a lot in providing specialised training to anyone we recruit,” added Mr White. “It’s always hard to get trained people, so we just need to make sure they have the basic skill set,” he stressed.

BMM Testlabs is based in Las Vegas, Nevada, in the United States. In Asia, the testing lab has offices in Macau and Singapore. It offers compliance testing and consulting services, pre-compliance and quality assurance testing, and random number generator and online product testing, helping casino technology suppliers understand and comply with the different  regulatory environments in Asia Pacific for land-based gaming, online gaming and sports betting.

In Macau, said Mr White, BMM was part of the committee that helped draft the dealer-operated electronic table game regulations introduced earlier this year by the Gaming Inspection and Coordination Bureau – also known by its Portuguese-language acronym DICJ. The company has already tested “a number of products” according to the new technical standards. “It’s business as usual for us,” said Mr White.

In late November, BMM announced it had been licensed by the Philippine gambling regulator, the Philippine Amusement and Gaming Corp (Pagcor), to certify online gaming products in that country.

Mr White said the company had “quite a number of customers looking to get their products certified throughout Asia in various places”. He added gaming operators were increasingly aware of the importance of reassuring their players “that what they’re playing is fair and reasonable. Customers are coming up and saying ‘We want to have some integrity in our products’,” the BMM executive added.

“We’re meeting with people, we’re understanding what’s going on and just waiting for things to be formalised,” the BMM executive said. “We’ll be there to help whoever requires our services, whether manufacturers, operators or regulators,” he vowed.

A Macau court was offered evidence on Monday, including of recordings from police-wiretapped telephone conversation, that the prosecution says proves the direct involvement of Levo Chan Weng Lin... END_OF_DOCUMENT_TOKEN_TO_BE_REPLACED