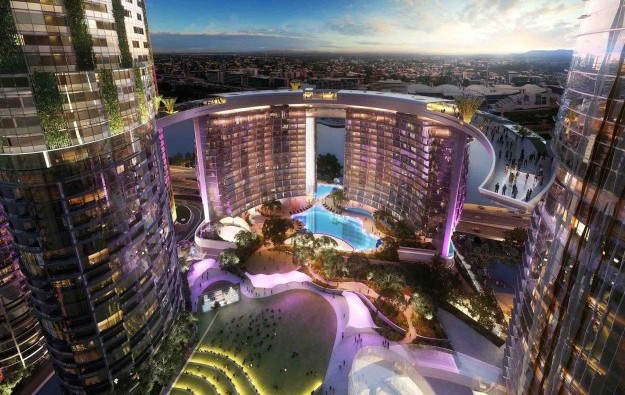 Shares of Australia-based Echo Entertainment Group Ltd rose to a record high on Tuesday morning after the firm fended off competition from billionaire James Packer’s Crown Resorts Ltd for the right to develop a multibillion-dollar casino resort in Queensland’s capital, Brisbane.

The stock rose as high as AUD5.07 (US$3.74) in Tuesday morning trading on the Australian Securities Exchange in Sydney, its highest level since a June 2011 initial public offering, according to Bloomberg data. By the close of Sydney trading, Echo’s stock had settled back to AUD4.87, a gain for the day of 0.62 percent.

“This project is potentially transformational for both Brisbane and Echo Entertainment,” Echo chairman, John O’Neill, said in a statement on Tuesday. “Our commitment to South East Queensland is evident in the scale and quality of what we’re proposing, including the relocation of our headquarters to Queensland at the appropriate time,” he added.

Echo will receive a fee for operating the integrated resort. Echo’s partners will receive fees for any VIP business that they directly refer to the casino, according to Tuesday’s statement.

The project (pictured in a rendering) described by Echo as an “integrated resort” will have luxury hotels, including one under the Ritz-Carlton brand and one under the Rosewood brand; residential apartment towers; luxury shopping; and public spaces along the Queen’s Wharf dock area.

Echo chief executive Matt Bekier said the proposed development will be an asset for Queensland “that will compete with anything in Macau, Singapore or other destinations around the world”.

“We look forward to progressing a development of which the people of Brisbane will be immensely proud, and that will deliver substantial economic and other benefits for Queensland,” Mr Bekier added.

Construction of the resort is expected to start in early 2017 and the estimated completion date is 2022, the firm said in Tuesday’s statement. The company will also retain ownership, under a long-dated lease, of the buildings at Echo’s existing Brisbane gaming venue, Treasury Casino and Hotel.

Echo hasn’t given any public commitment on the minimum amount of money to be invested in the Queen’s Wharf project. On Tuesday, the company said it expects to fund the project through existing and new debt facilities and cash flow generated by the business.

Most of Macau’s casino operators are likely to generate positive free cash flow in the first quarter, given the robust recovery level of mass-market gross gaming revenue (GGR) in January, relative... END_OF_DOCUMENT_TOKEN_TO_BE_REPLACED