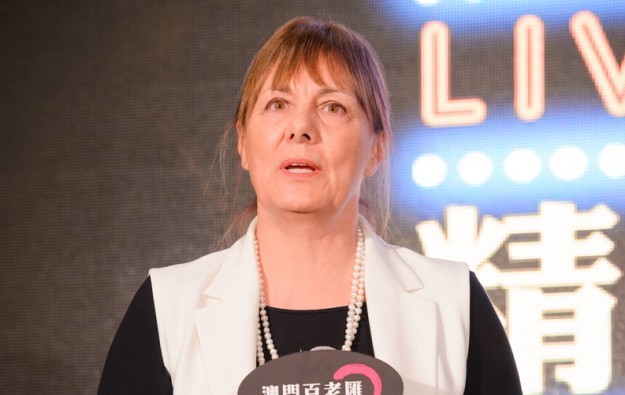 The company announced on Tuesday the programme for the 3,000-seat Broadway Theater, which will open on May 30 with the 40th anniversary concert of Hong Kong pop music icon Alan Tam. Following the opening show will be concerts from classic singers Fei Yu Qing and Liza Wang, soft rock band Michael Learns to Rock and shows from pop singer Sun Nan with Leo Ku and Kit Chan at the end of June.

In the first few months Broadway Macau will target “renowned Asian artists”, said Ms Murphy, adding that in August the theatre will have two-week run shows “of a potential musical, a Broadway show”.

“We will be looking at what would complement whatever other offerings there are in the [Macau] market,” she told reporters on the sidelines of a press conference.

The HKD5-billion (US$645-million) Broadway Macau – connected to Galaxy Macau by a pedestrian bridge – is due to open on May 27. That is the same date as the launch for the HKD19.6-billion Galaxy Macau Phase 2.

While no public announcement has yet been made about how many gaming tables Galaxy Macau Phase 2 will get from the government, Broadway Macau is likely to open with about 30 tables, Francis Lui Yiu Tung, vice chairman of Galaxy Entertainment, said late last month.

Broadway Macau will have a mass-market appeal, with live performances, bands, street entertainers and hawker-style vendors. That contrasts with an initial phase of Cotai development, where five-star hotels and restaurants were the norm.

The launching of the new mid-market entertainment and gaming venue comes at the time when gross gaming revenue (GGR) in Macau is slumping. GGR fell 39.4 percent year-on-year in March to approximately MOP21.49 billion (US$2.69 billion), and is heading for another fall of about 39 percent this month, say several investment analysts.

The decline in gaming is starting to have some impact on some of the non-gaming segments, Galaxy Entertainment’s Macau market rival Sands China Ltd said last week. Galaxy Entertainment earlier this month reported that revenue for the first quarter of 2015 fell 32 percent compared with the prior year period, to HKD13.7 billion.

That is not a concern for Galaxy Entertainment’s strategy for Broadway Macau. Ms Murphy said the launching “couldn’t be better timed because of the pricing position in terms of what we are”.

“This [Broadway Macau] is incredible affordable … It is targeting a market that has been somewhat eclipsed by a higher-value gaming customer. We are looking at the totality of the market, which is growth in tourism,” she said.

The company opened online bookings about a month ago and demand “is exceeding expectations,” said Ms Murphy. “We are currently about two-thirds sold out for the first 90 days,” she added.

Most of Macau’s casino operators are likely to generate positive free cash flow in the first quarter, given the robust recovery level of mass-market gross gaming revenue (GGR) in January, relative... END_OF_DOCUMENT_TOKEN_TO_BE_REPLACED