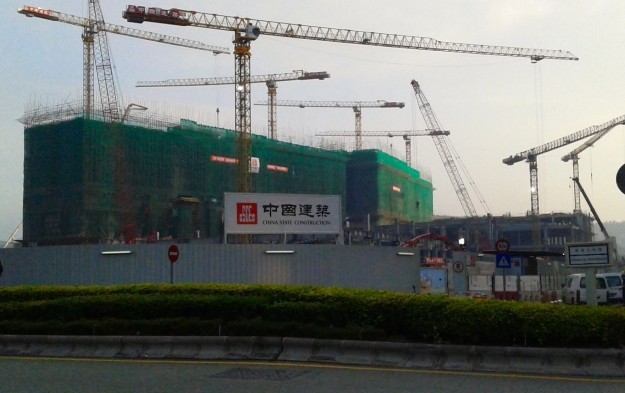 China State Construction International Holdings Ltd – a main contractor on some major infrastructure projects in Macau, including the MGM Cotai casino resort (pictured in a January file photo) – has been given a ‘buy’ rating by Daiwa Securities Group Inc.

At 3.41 pm on Monday, China State Construction International’s stock stood at HKD13.06 in Hong Kong, up 4.31 percent from Friday’s close.

On Friday, the company issued its six-month operational report for the period to June 30. The group recorded an accumulated new contract value of HKD36.84 billion in the six months to June 30.

“The major risk to our call would be delays in project approvals,” wrote Daiwa analyst Kelvin Lau on its rating for the construction firm’s stock.

Friday’s half-year report showed that the value of all China State Construction International projects in progress in Macau was HKD18.84 billion as of June 30. Of that, HKD13.81 billion, or 73.3 percent, was backlog.

In September, Deutsche Bank AG in Hong Kong mentioned timings on construction permits for phases of existing Macau infrastructure projects as having a negative impact on the opening timetables for the new casino resorts being built on Cotai.

In May, MGM Resorts International, parent of MGM China Holdings Ltd, stated the latter’s MGM Cotai resort is scheduled to launch in “the fourth quarter 2016”. Previous statements from MGM Resorts had mentioned a “fall” (autumn) 2016 launch.

In June, MGM China said it had agreed with existing lenders an amendment and expansion of its credit facilities – to HKD23.4 billion – and an 18-month extension on the maturity of them. The budget for the MGM Cotai project has been described as US$2.9 billion, excluding land costs and capitalised interest.

China State Construction International’s Macau order book includes 50 percent of a joint venture with Australia’s Leighton Holdings Ltd for construction of Wynn Macau Ltd’s US$4.1-billion Wynn Palace casino on Cotai. The cooperation is known as Leighton China State Joint Venture. Wynn Palace is due to open in “the first half of 2016”, according to a filing from Wynn Macau Ltd in May.

A Macau court was told on Wednesday that Asian American Entertainment Corp Ltd (AAEC), led by Taiwan businessman Marshall Hao Shi-sheng, was to blame for its failed tie-up with United States-based... END_OF_DOCUMENT_TOKEN_TO_BE_REPLACED